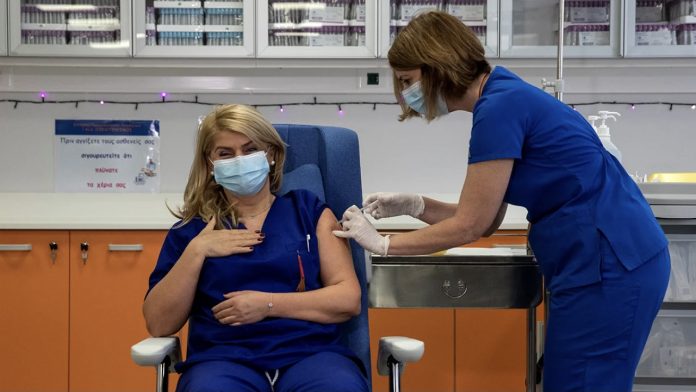 “After a year and a half, no one can claim ignorance about the coronavirus anymore,” he announced in a nationally televised address.

“The country will not shut down again due to attitude adopted by certain people … It’s not Greece that’s a danger, but unvaccinated Greeks.”

Aged care workers have been given 34 days to book their vaccination appointment or risk facing suspension.

Workers at state-run and private hospitals will have just over two months to book in their jab before their September 1 deadline comes into full force.

Those who miss out before the deadline will risk suspension.

All indoor commercial areas – including bars and theatres – will be open exclusively to those who are vaccinated until the end of August, as part of the announcement.

The new restrictions will apply nationwide.

Greece’s bio-ethics committee recommended mandatory jabs for aged care workers be used “as a last resort measure” if prior efforts to ramp up the rollout fail.

An opinion poll on Skai television this week revealed that a majority of Greeks support mandatory COVID-19 vaccinations for specific groups.

It follows a series of coercive measures to target Greece’s unvaccinated and vaccine-hesitant reward the vaccinated, including offering cash incentives to encourage younger Greeks.

Just over 40% of residents have been fully vaccinated since the rollout began earlier this year but appointments have been falling in recent weeks, Reuters reports.

COVID-19 infections have surged since late June, with the number of daily infections per 100,000 residents over seven days rising from 3.5 to 17 since June 24.