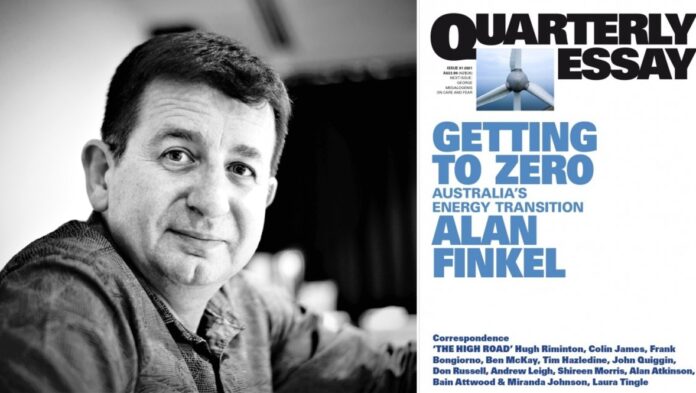 Dr Nick Dallas will present a special lecture entitled Demystifying Professor Alan Finkel’s Getting to Zero Emissions Report, on Monday 7 June, 7.00pm, at the Greek Centre, as part of the Greek History and Culture Seminars, offered by the Greek Community of Melbourne.

Professor Alan Simon Finkel is an Australian neuroscientist, electrical engineer, entrepreneur and philanthropist. He served as Chancellor of Monash University from 2008 to 2016, and held the office of  Chief Scientist of Australia from 2016 to 2020.

During this time, he led a number of reviews on the national electricity market, developing a national hydrogen strategy and developing a low emissions technology roadmap. The most recent issue of the magazine Quarterly Essay contains his strategic roadmap on how Australia can transition to zero emissions by 2050.

Achieving net zero emissions is an extremely difficult task but not an impossible one. Australia cannot wean itself off fossil fuels overnight but by embracing renewables along with other technological developments, fossil fuels can be made obsolete. This presentation will demystify the reports main recommendations and the strategies proposed to reach a net zero target.

Nick Dallas studied at the University of Melbourne and has a multi-discipline background which spans chemistry, political science and economics. Presently he is the sales director for Vocational Education and Schools divisions at McGraw-Hill Education, a global learning science company. He has been on the Greek Community of Melbourne’s Board of Management since 2012 and takes an active interest in all the Community’s education initiatives. As the author of Climate Change Basics (2008, McGraw-Hill Australia) he has had a long-term interest in the challenges involved addressing climate change.