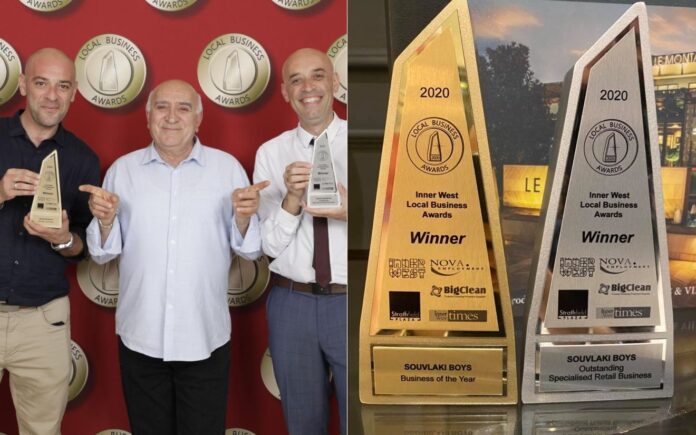 Souvlaki Boys in Marrickville has managed to beat an estimated 20,000 businesses in the Inner West area to win the prestigious ‘2020 Inner West Business of the Year’ award in the area’s local business awards.

Earlier in the night, Souvlaki Boys owners Nick and Arthur Alepidis were grateful to receive the ‘Specialised Retail Business Award’, beating 19 other business nominees. Unbeknown to them, they were later to receive the biggest award and shock of their lives.

Speaking to The Greek Herald, Nick Alepidis says he was in complete ‘shock and disbelief’ to see his business’ name show up on the ‘20202 Business of the Year Award’ screen.

“We were just shocked because we weren’t actually anticipating it,” Nick says to The Greek Herald.

“We weren’t actually expecting to be nominated for the Business of the Year award to tell the truth. When we saw our name up on the screen we were just surprised then they called our names up… it was a huge honour and a big shock.”

Nick was particularly “humbled and honoured” to receive the award, recognising Souvlaki Boys had beat many other well established businesses to claim the top prize.

“With all the issues that have gone on with covid this year, just to make it this far along with all the other businesses is again just an honour.”

Nick said he and his brother, Arthur, are simply thankful to get recognition for their business, carrying on the legacy of their father, Greg Alepidis.

“To get recognition like that, especially for my father who’s the one we’re trying to carry the legacy for… To keep doing the work that he’s done over the years, just to live up to that.”

“Also trying to keep all of our customers happy and trying to make the best product we can as well.”

The Souvlaki Boys are joined by a host of Greek businesses who managed to take home awards in Sydney’s Local Business Awards, including Miloway Wines, Trianon Cake Shop and Vicky Zafiropoulos of Hairem Hairdressing.