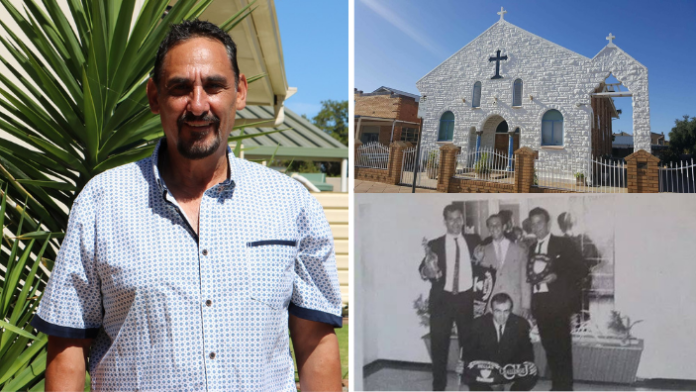 A member for the past 50 years, Fred has served as a treasurer of the St George Greek community, a cook at the Hellenic Centre for the past 10 years and he’s also known for his involvement with Hellas Soccer Club, which he served as a player and administrator.

“Last year was a hard year for all of us but out of 2020 came some really positive things,” Port Pirie Mayor, Leon Stephens said as he presented the stories of the council’s five quiet achievers.

Born and bred in Port Pirie to parents who migrated to Australia from the island of Ikaria, Fred is a well-known and loved community member.

“I’ve been involved with the Greeks all my life and loved it. I brought up my children the same way. We need to keep our great traditions alive,” Fred, 63, tells The Greek Herald , as he expresses his pride for the award.

“We are the second Greek community formed in Australia,” he says, explaining that the first Greek Orthodox church in South Australia was opened in 1925 in Port Pirie.

“There’s nothing better than going to the church and the Hellenic Centre on a Sunday and to be able to speak to each other in our own language,” he says.

But what keeps Fred motivated?

“I want my grandkids to grow up the same way. Our ancestors created what we have here today and now it’s up to our kids and their kids to continue it or it’s just going to turn into memories,” he says talking about the challenges the Greek as an ethnic community faces in a regional town.

“Our community is reducing as there are no work opportunities here. Young people go to Adelaide to study and they don’t come back to Pirie unless they are visiting.”

According to Mr Seindanis there are currently 300 residents of Greek heritage living in Port Pirie or 2,14% of the total population.

The latest census data indicate that Greek is the most popular language spoken at home other than English in Port Pirie.

“We are trying to bring back our young members because they are the future and we need their input to keep our community going,” he concludes.

*Fred will be presented with his Certificate of Merit during Port Pirie’s Australia Day awards presentation that will be held at Flinders View Park on Tuesday 26 January.