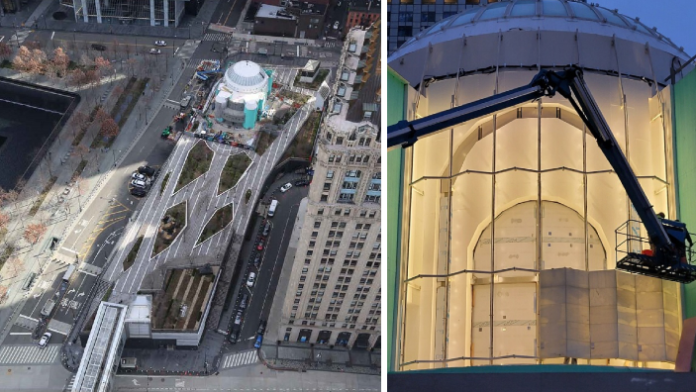 Saint Nicholas Shrine, the long-awaited church that is being constructed to replace the original St Nicholas Church at Ground Zero in Manhattan, has begun to “glow” after being clad in the very same Pentelic marble as the Parthenon, atop the Acropolis in Athens.

Pentelic marble, carved out of the ground from the quarries at Penteli, north of Athens, is a fine-grained calcitic marble. It is white, but has a unique golden tinge that makes it appear as if it is alive.

The ancient quarry on Mt. Pentelicus is protected by law and it is used exclusively to obtain material for the Acropolis Restoration Project — except for the Shrine at Ground Zero.

The radiant, cream-coloured light of the marble of the Parthenon has now formed part of the new walls of the shrine, and this will reflect a warm ambience outward toward those who stand on the hallowed ground of Ground Zero, where nearly 3,000 people perished in the terrorist attack on September 11, 2001.

“Unlike the Parthenon, Saint Nicholas will not be a mountain of marble, but rather a monument of memory,” His Eminence Archbishop Elpidophoros of America said in a letter on the progress of the Shrine’s rebuild.

READ MORE: Exterior of shrine at Saint Nicholas Greek Orthodox Church to be ready by September 11.

“Its glow will be a candle lit to dispel the hatred and inhumanity that was behind 9/11, and to remind the world that the Light of Christ, the Light of the Resurrection shines on, overcoming all darkness.”

Archbishop Elpidophoros then went on to discuss the process of getting the marble to the United States in the first place, stressing how it had to be “conveyed” all over the world before reaching its final destination.

READ MORE: The small Greek Orthodox Church that still grapples with the aftermath of 9/11.

“We begin in Attica, where the marble has been quarried from the very same vein as the Parthenon marble, which is white with a faint tint of yellow, making it shine with a golden hue under sunlight,” Archbishop Elpidophoros says.

“Then this marble has travelled to Austria, for its fabrication into the panels that will adorn the exterior of the building and give it that unique glow. From Austria, the panels went to Minnesota, to be assembled into their unique configuration with glass.

“And from Minnesota, to New York and the site of Saint Nicholas for the installation… A journey of over 6,700 miles!”

From the pictures we’ve seen of the shrine rebuild so far, it seems the effort was worth it!