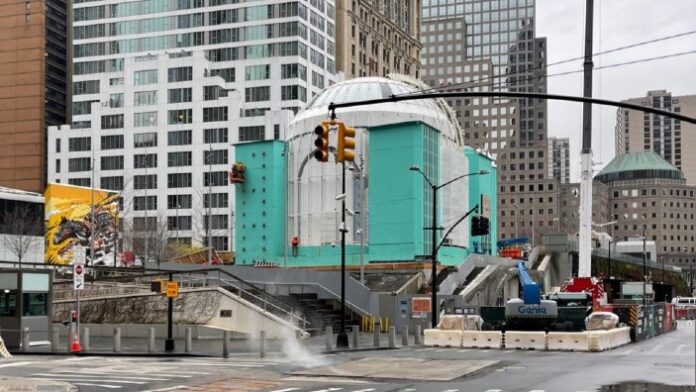 Archbishop Elpidophoros of America expressed on Monday confidence that the exterior of the National Shrine at the Saint Nicholas Greek Orthodox Church will be completed before September 11 this year.

“The Saint Nicholas Shrine takes on a role of cenotaph for those who perished on 9/11, much as the Woman in the Hymn of Kassiani took on the role of a myrrh-bearer,” Elpidophoros said in a letter informing on developments with the construction of the new church.

“It is an awesome responsibility and privilege to the Greek Orthodox Community, that our National Shrine would serve as a cenotaph for those who would engage it as such,” he added.

In a separate letter, Chairman Dennis Mehiel and Vice-Chairman Michael Psaros said that, despite the challenges of COVID-19, the rebuilding of the Church has continued unabated since the restart on site in August 2020, noting that the Shrine’s exterior will be finished in time.

“The complexity of this building cannot be overstated. The combination of light, stone (Pentelic Marble), and glass will result in an extraordinary glow on the exterior at night, and an ethereal translucence on the interior during the day,” they said.

“Combined with a full scale program of traditional Byzantine Iconography executed by one of the masters of Mount Athos, the Saint Nicholas Shrine will be a national and indeed, international, focal point for our Orthodox Christian Faith.”