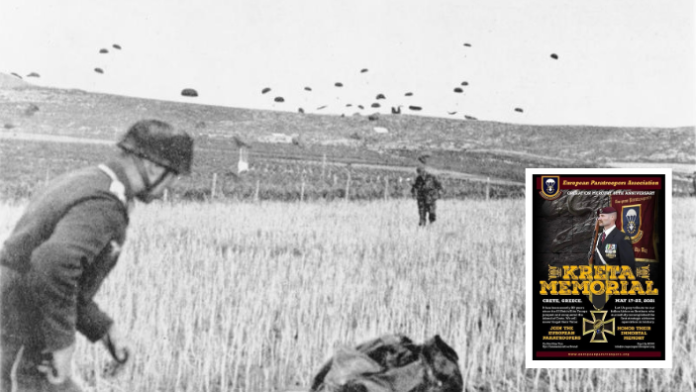 Outrage by Cretan politicians and ordinary citizens on the island of Crete, Greece, has led to the cancellation of a controversial event by a paratroopers association that was planning to “honour” the 80th anniversary of the Nazi invasion of Crete.

The so-called European Paratroopers Association announced on social media recently that it was planning an event in Chania sometime in May to pay their respects to “the bravery of the German paratroopers.”

“It has been exactly 80 years since the III Reich Elite Troops jumped and conquered the island of Crete. We will never forget their valor,” the event poster stated.

According to some media reports, a number of Greek people were also set to participate in the event as there are at least three on the Board of Directors and Executive Committee of the Association.

With this in mind, the controversial event was brought to the attention of the Greek Parliament, with the Regional Governor of Crete and his Deputy pointing out “that no relevant permission was ever given by anyone for such as event,” which was to also include a tour of historical sites of the Battle of Crete.

“Only the posting of the relevant invitation on the internet is an insult to historical memory, democracy and freedom,” Deputy Regional Minister of Culture, Costas Fasoulakis, said.

With questions submitted to the ministries of Foreign Affairs, Defense, Interior, Culture and Citizen’s Protection, KINAL MP Vassilis Kegkeroglou also called on the government to not allow such an event that “not only blackens Greek history, but also insults the national memory of thousands of freedom fighters who fell in the battlefield and of all Cretans.”

Ultimately, the event was canceled on Tuesday night and the Association made a last effort to justify the unjustifiable, claiming in a statement that their purpose was to “promote camaraderie,” cretalive.gr reports.

“We are very sorry if someone was offended by this and respecting the feelings of the native Greeks, we will not celebrate the 80th anniversary of the Battle of Crete,” the Association wrote in a statement.