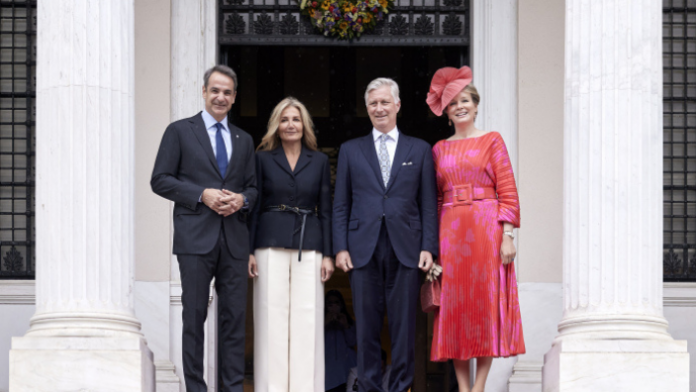 The President of the Hellenic Republic, Katerina Sakellaropoulou met with King Phillipe and Queen Mathilde of the Belgians as a part of the royal’s official visit to Greece.

The visit between the nations reaffirmed strong bilateral relations with the President noting that the visit did in fact reflect the strong traditional bonds of friendship that link Greece and Belgium.

“We are partners in the European Union, allies in NATO and we have developed a significant degree of cooperation within international organizations,” President Sakellaropoulou said.

“I would like to underline that we have both the desire and the commitment to develop our relations even further in every area of mutual interest,” she added.

During the visit, the crisis occurring in Europe could not be avoided with the President noting that the visit was occurring at a time of great uncertainty in Europe.

“Russia’s assault on Ukraine continues with no visible sign, in the immediate future, of a ceasefire, creating huge problems,” Sakellaropoulou stressed.

“We have all been shocked recently by images of brutality in the towns around Kyiv after the withdrawal of Russian troops, especially the images from Bucha,” she added.

Sakellaropoulou also stressed Greece’s pledge to support EU member-states who are on the front line, taking in Ukrainian refugees as a result of the humanitarian crisis that the war has created.

King Phillipe of the Belgians thanked President Sakellaropoulou for her company and the invitation to Greece, marking their first trip since the pandemic began.

“We are two similar countries, and we have much to offer one another. We both have a European orientation, as well as a comparable population,” King Phillipe said.