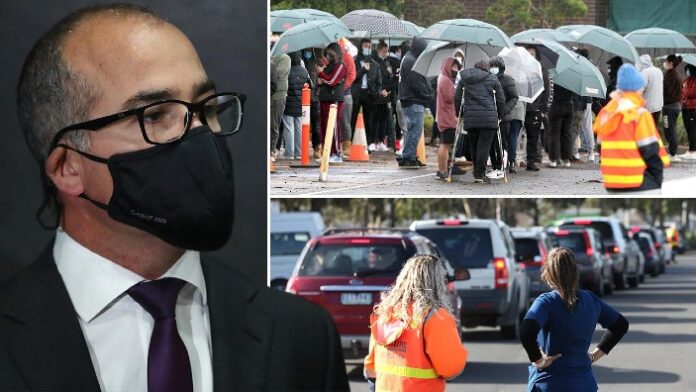 The Victorian government has announced a seven-day lockdown today in a bid to curb the state’s growing coronavirus outbreak.

One of the cases is now in intensive care in hospital and on a ventilator.

The circuit-breaker lockdown will be in place until 11:59pm on June 3. Mr Merlino said there would be only five reasons people would be allowed to leave their homes:

Schools will close for the duration of the lockdown, but childcare and kinder will be open. Cafes and restaurants can offer take-away only, and public and private gatherings will not be allowed. The vaccination program will also expand in Victoria to include anyone aged 40 years and over.

There are more than 70 exposure sites, including the MCG and Docklands stadium. Exposure sites added last night included cafes and businesses across Melbourne’s south-east and the Mornington Peninsula.

Exposure sites had previously been largely spread across the city’s north and west.

Testing capacity is being ramped up across the state as the growing exposure sites affect tens of thousands of people.There were 40,411 test results received in the 24 hours to midnight.

That marks among the highest days of testing in Victoria since the pandemic began, with more than 41,000 test results reported on August 9 last year and more than 42,000 on July 26.

Concerns have been raised about the safety of aged care residents in Victoria amid the current outbreak, given more than 25 facilities are still waiting to receive their first vaccine doses.

It was revealed yesterday that of the 598 facilities in Victoria, 569 had received a first dose, leaving 29 facilities completely unvaccinated.

The government said 361 facilities had had two doses. It said four more would receive a first dose yesterday, but did not confirm that had happened.

Shadow Health Minister, Mark Butler, said given how quickly the virus spread and how deadly its effect was in aged care homes during Melbourne’s second wave last year, the statistics were unacceptable.

“The idea that 29 facilities in Victoria, given all that happened last year, haven’t even had a single dose, is a scandal,” he said.

“As well, there’s several hundred aged care facilities in Victoria that have only had one dose. These people are not yet protected as Scott Morrison promised they would be.”

Aged Care Services Minister Richard Colbeck said aged care homes still waiting to receive first doses of the vaccine should be covered in the next couple of weeks, but that he was “very comfortable” with the rollout so far.

He said given the outbreak in Victoria, aged care homes there were being prioritised.

“It’s not an overnight exercise, it needs to be done safely and progressively which is exactly what we’ve done,” Senator Colbeck said.

“We will have all of those providers done very quickly and as I’ve said a number of times we’ve prioritised those remaining ones in Victoria.

“We should have all of the providers around the country done within the next week or so.”