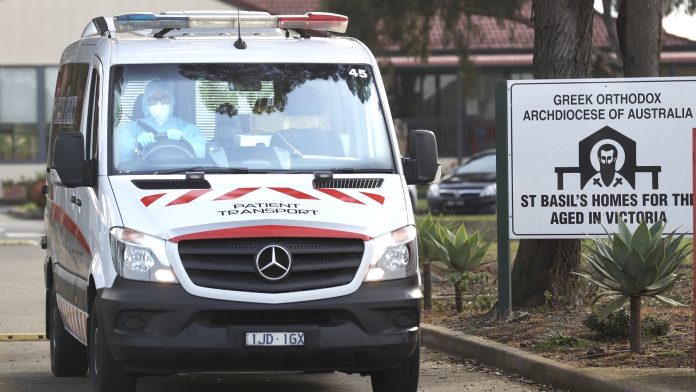 The home’s operators have asked the coroner to excuse them from giving evidence on the grounds they might incriminate themselves.

Kon Kontis and Vicki Kos were due to give evidence next week into the deaths of 50 residents at the home last year.

That is until a barrister for the pair asked on Tuesday that they be excused on the grounds they might incriminate themselves.

It is expected the application will be opposed by families who lost loved ones in the outbreak.

Coroner John Cain will hear submissions from the interested parties before making a ruling.

The inquest has already heard evidence St Basil’s management wasn’t happy with a state government decision to replace the entire staff with an agency workforce early in the outbreak.

Replacement worker Heleni Bagiartakis told the inquest she was surprised when Ms Kos said she wouldn’t accept phone calls regarding the clinical care of residents after she was stood down.

“The message though was, ‘It wasn’t our decision, we don’t agree with the decision, therefore it’s not our problem’.”

John Atzarakis’ 77-year-old mother Fotini, who was only meant to stay at St Basil’s for a fortnight of respite care, died in the outbreak.

He says management owes the community an explanation.

Mr Atzarakis said his 83-year-old father was struggling with the loss of his life partner.

“He’s not coping with it, he takes all the blame,” he said.

Mr Atzarakis said it was “shameful” that the operators of the home were trying to avoid what he believed was their responsibility to give evidence.

“These people [the residents] were elderly, these people were weak, they were at the mercy of the staff and management,” he said.

“The staff and management were accountable for their lives, they need to take ownership.

“I lost my mother because of that. And they owe everyone an explanation.”

Spiro Vasilakis, whose 81-year-old mother Maria died during the outbreak, said he wanted to hear directly from those who ran St Basil’s.

“The families would be outraged, absolutely outraged, that they have not got the decency and the honesty to front up and face the questioning,” he said.

”Give us your story, from your mouth.”

The five-week coronial inquest will continue hearing from dozens of witnesses, including nurses and centre managers.