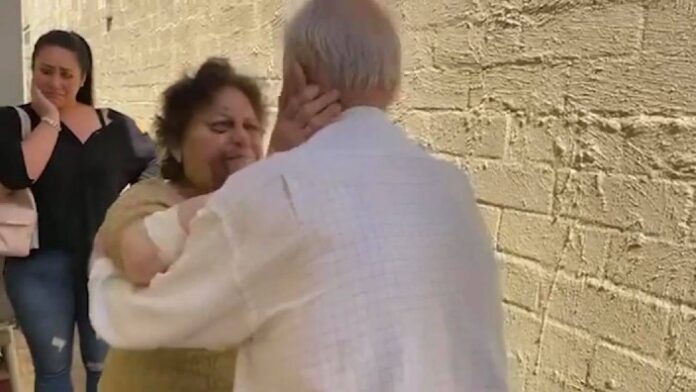 Penelope Katsavos, the woman bashed in a horrific attack outside Saints Constantine and Helen Greek Orthodox church in South Yarra, has returned home, according to 3AW.

3AW radio host, Neil Mitchell, received tear-jerking footage of her reunion with 83-year-old husband, Thomas, who has dementia. Penelope is his full-time carer.

In the video, Thomas can be heard crying as he hugs Penelope, while she looks into his eye lovingly.

“Because he has dementia we weren’t able to get him to understand where she was or what has happened,” she told the radio show.

“My heart was breaking into a million pieces because he was wandering around the house looking for her, and there was just nothing we could do.”

Penelope was opening the church in South Yarra at about 6am on March 13 when she was viciously attacked. A man grabbed the 78-year-old’s shopping trolley, punched her in the face, pushed her over and kicked her while she was on the ground.

The grandmother-of-six suffered bleeding on the brain in two spots, a fractured wrist and pelvis, as well as some severe bruising.

In recent days, the family have launch a gofundme page which will help purchase “the disability aids that the hospital has loaned her for 6 weeks or things that she may need to alter around her house to allow her to live as independently as possible with her injuries,” the page reads.

“Any money above that will be donated to charities that she chooses.”

A 36-year-old Box Hill man has been arrested in connection to the bashing of Penelope Katsavos.

He is expected to be charged with assault and theft offences.

“It’s a callous and violent and horrendous attack on an individual who was going about her own business,” he said.

Sen-Constable Peker wouldn’t say whether he believed the alleged offender would strike again, but confirmed no other assaults or incidents were reported in the South Yarra vicinity on Saturday morning.