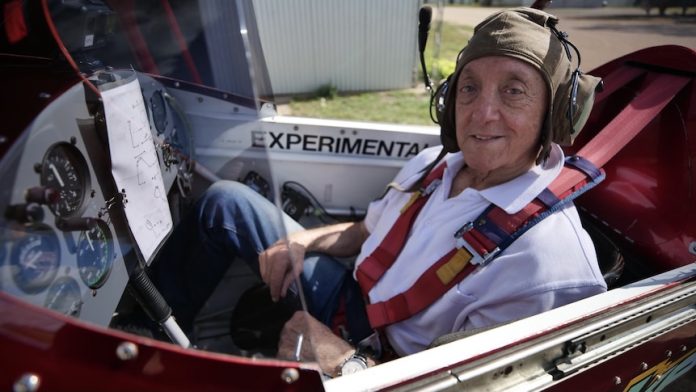 Chris Sperou, 82, is an adrenaline junkie and has been flying aeroplanes as a stunt pilot for more than 60 years.

His first flight was just as risky as his next.

“Basically, I was self-taught,” he grins to ABC News.

”The instructor would say ‘go out and do some revision and come back’.”

“I’d go out and put the aeroplane through its paces, so all the advanced [aerobatics] was self-taught”.

Sperou’s love for aviation began in Ceduna in South Australia’s south and took him on an international stage.

Sperou has represented Australia in international aerobatic championships several times, along with winning a swag of awards locally, and competed at the World Aerobatic Championships six times.

Mr Sperou and his long-time flying buddy, Warren Stewart, 83, say they have no intention of slowing down anytime soon.

“People ask me that, they say because of your age how do you keep going? Buggered if I know,” Mr Stewart told ABC News.

But Mr Sperou knows that time will come one day.

“When I’ve got to start thinking about it while I’m up there doing it, [it’s time to] give it away,” he said.

“Until then, he’s happy to keep turning his life upside down.”