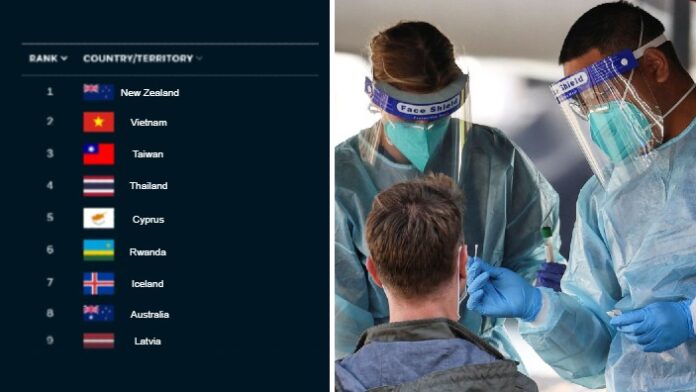 The COVID Performance Index compiled by the Lowy Institute ranked 98 countries’ handling of the COVID-19 outbreak, finding Australia and Cyprus performed in the top ten while Greece is lagging behind significantly.

Cyprus and Australia were ranked 5th and 8th respectively, while Greece sits in 32nd place.

This news comes as a shock to many as early in the pandemic Greece was hailed as a leader in handling the coronavirus pandemic, with Prime Minister Kyriakos Mitsotakis even holding a meeting with other “successful” world leaders back in May 2020 to share the country’s pandemic response.

Turns out New Zealand, closely followed by Vietnam and Thailand, were actually the countries which came out on top, while the United States was the fifth-worst performing country.

In their report, the Lowy Institute reveal that smaller populations, cohesive societies and capable institutions were big factors in successfully dealing with the pandemic.

Countries with populations of fewer than 10 million people consistently outperformed large nations throughout 2020, although this lead narrowed slightly towards the end of the 2020.

One of the authors of the study, Hervé Lemahieu, added that the research also disproved the claim that authoritarian regimes had an advantage in handling the global pandemic. Democracies actually slightly outperformed authoritarian countries in suppressing the coronavirus.

“We’ve had this sweeping narrative take hold about the inherent superiority of societies and different political systems, and for the most part we’re saying that is bollocks,” Mr Lemahieu said.

Smaller countries were able to “ring fence” their populations, Mr Lemahieu said, while their larger counterparts had issues in being able to close external and internal borders.

“Also, countries with smaller populations may well have stronger social contracts between governments and citizenry and greater levels of trust in governments,” he said.

The study measured a number of key indicators including confirmed cases, deaths, cases per million people, deaths per million people and cases a proportion of tests. China was not included because all of its testing rates are not publicly available.