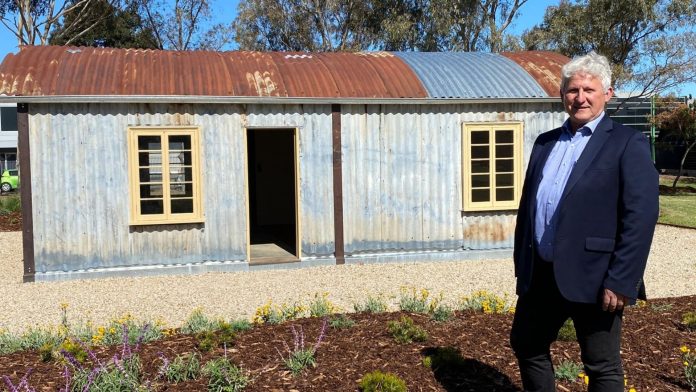 The Keilor Police Hut is a small, prefabricated, corrugated-iron clad building that was originally manufactured in Great Britain or Scotland in the mid-1800s, and imported to Australia like you might import a piece of flat-pack furniture today.

It was originally erected in Keilor in 1853 to house the Keilor Police on the road to the goldfields and has subsequently been moved several times, most recently as part of this conservation project. It now stands on Wurundjeri Country at Harrick’s Cottage in Keilor Park.

The awards jury citation said: “The interpolation of conservation, historical interpretation, and the discreet insertion of a technological prosthesis to facilitate the authentic re-erection of this archaeological relic, is a considered study in the science of architectural conservation making Keilor Police Hut a worthy winner of this year’s Architecture Award for Heritage – Conservation.

Arthur Andronas, Director of Andronas Conservation Architecture, said: “We are honoured to have received peer acknowledgement for our conservation efforts on the Keilor Police Hut.”

“We faced a range of challenges in relocating and restoring the hut, including working out how to take it apart and put it back together without the instructions,” Mr Andronas added.

“We also had to come up with a creative solution for waterproofing at least half the building while also maintaining its original form, which is why the interior is now half new-looking, and half original-looking.

“We’d like to thank Brimbank Council and the Keilor Historical Society for entrusting us with this little gem.”

The Keilor Police Hut has also been included in a submission to UNESCO to have Australia’s 19 century portable buildings recognised on the World Heritage Register.

The Victorian Architecture Awards honour the state’s best architecture for 2022. Across 14 categories, a total of 66 projects were granted named awards, architecture awards and commendations, drawn from a pool of 125 shortlisted projects – one of the largest ever selected for the Victorian Chapter of the Australian Institute of Architects’ awards program.