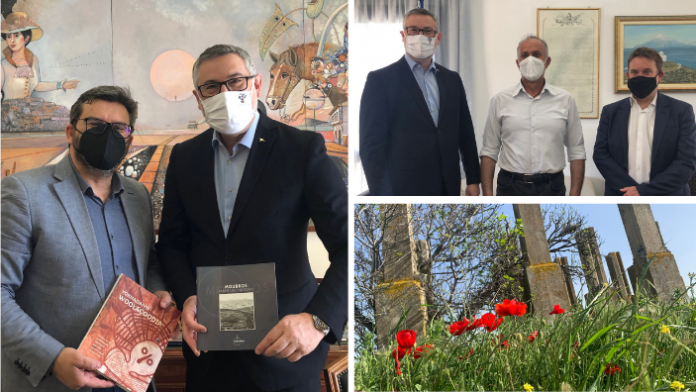 Australian Ambassador to Greece, Arthur Spyrou, paid a visit to the Greek island of Lemnos on Wednesday and spoke with officials about the recently announced funding by the Australian Government for the creation of a Remembrance Trail.

The Australian Government has allocated $4.9 million for the Lemnos Remembrance Trail in this year’s Federal Budget.

The trail is being created in recognition of the Australian doctors, nurses and other service personnel who served on the Greek island during the First World War.

During his visit, Ambassador Spyrou held meetings with both the Mayor of Lemnos, Dimitris Marinakis, and the Governor of Lemnos, Angelos Vlattas, and thanked them for their support and commitment to the realisation of the Remembrance Trail.

“Very moved to be in Lemnos, in the footsteps of the ANZACs – at the Australian pier from where thousands sailed for Gallipoli,” the Ambassador wrote on Twitter after his meetings.

“I’m proud Australia will build an ANZAC memorial trail on the island.”

The creation of the Remembrance Trial was first announced back in April 2018 by Melbourne’s Lemnos Gallipoli Commemorative Committee and the Prefecture of the Northern Aegean.

In an interview with The Greek Herald in mid-April, the Australian Veterans’ Affairs Minister, Andrew Gee, described the Remembrance Trail on Lemnos as “a significant project that will help Australians better understand, and honour, the service and sacrifice of Australian diggers, nurses and doctors who served at Lemnos with great distinction during the First World War.”

“It’s a story of friendship between Greece and Australia that needs to be told,” Minister Gee added.

Mayor Marinakis also spoke with The Greek Herald about the Australian Government’s investment in the trail and said “this decision underlines the close historical relations of Lemnos with Australia.”

“We look forward to seeing this ambitious project completed and we are sure it will become a pole of attraction for visitors…” the Mayor concluded.

READ MORE: ‘A story of friendship that needs to be told’: Minister Gee on Lemnos Remembrance Trail.