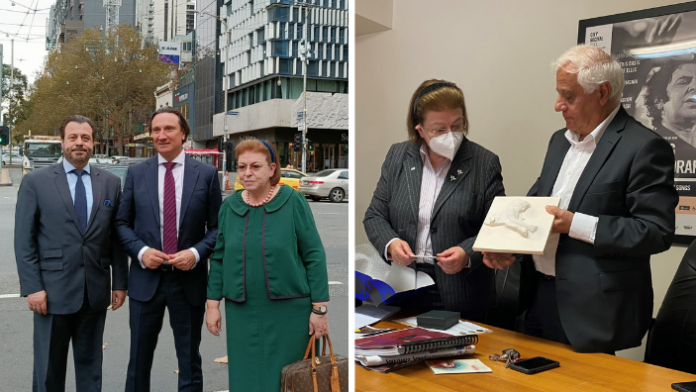 During her official visit to Australia this week, the Greek Culture and Sports Minister, Dr Lina Mendoni, has held meetings with both the Greek Orthodox Community of NSW (GOCNSW) and the Greek Community of Melbourne (GCM).

Here is The Greek Herald‘s rundown of what was discussed during these meetings.

The Board of GOCNSW held a meeting with Dr Mendoni on Saturday, April 23 at the Greek Community Club in Lakemba.

The Minister was accompanied to the meeting by her Special Advisor, Dr Anna Panagiotarea, as well as the Consul General of Greece in Sydney, Christos Karras.

Dr Mendoni had a constructive discussion with members of the Board on issues relating to the local Greek community including the Greek Festival of Sydney and the upcoming Greek Film Festival.

At the end of the meeting, the Minister was given a tour of the Club followed by a dinner in her honour.

Dr Mendoni visited the GCM’s Greek Centre in the historic Greek Precinct of Melbourne on Wednesday, April 27. The President of the GCM, Bill Papastergiadis OAM, and members of the Board of the GCM welcomed Dr Mendoni.

Mr Papastergiadis led a tour of the Centre noting its significance, as well as detailing the upcoming plans for it, which include a major renovation of its lobby and the imminent installation of the replicas of the Parthenon frieze on the building’s balcony facade.

On hand to greet the guards amongst others was also Vice President of the GCM Dr Jim Bossinakis, Mr, Assistant Secretary Vicki Kyritsis and Board members Mr Leonidas Vlahakis and Mrs Spiridoula Demetriou.

Mr Papastergiadis said: “Following 2 years of lockdown, now is the time to expand the links and projects that can tour between the two countries.”

“Language and culture is the backbone of the GCM’s core activities and it is important to bring to Australia artists and academics from Greece. But it is very important to discuss further opportunities that could be explored by community groups in Australia and the Ministry of Culture,” the GCM President added.

Dr Mendoni thanked the GCM and Mr Papastergiadis and presented him with a reproduction fragment of a marble votive relief of seated Asklepios, authentically cast exhibited at the National Archaeological Museum.

“It is essential for all the Greeks around the world to be proud of their heritage and culture,” Dr Mendoni said during the meeting.

“We are looking forward to working closely with the Greek Community of Melbourne and I am hopeful we will announce very soon some very exciting projects.”

The visit to the Centre was followed by a short stroll in the historic Lonsdale Street Greek Precinct and lunch at the Tsindos Restaurant, where they enjoyed Greek delicacies.