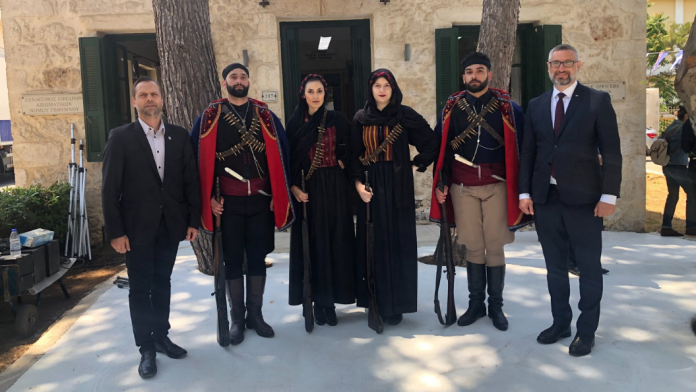 Australian Ambassador to Greece, Arthur Spyrou, attended commemoration events in the Cretan cities of Rethymno and Chania this month to commemorate the 81st anniversary of the Battle of Crete.

Ambassador Spyrou paid a visit to Preveli Monastery in Rethymno first and presented a letter from The Governor-General of the Commonwealth of Australia, His Excellency General the Honourable David Hurley AC DSC (Retd), to the Bishop of Lampi, Syvritos and Sfakia, His Eminence Irineos.

The letter expressed the gratitude of the Australian people for the selfless assistance offered by the Abbott and monks of the Monastery to the ANZAC’s after the fall of Crete to the Axis powers.

Later, Ambassador Spyrou visited the Hellenic-Australian Memorial in Rethymno and presented, on behalf of the Returned and Services League of Australia, awards to top students from Rethymno and Chania.

The Ambassador also gave a donation to the Fund for the Destitute of the Holy Metropolis of Lampi, Syvritos and Sfakia, as a token of the gratitude of RSL to the Cretan people and monks of the Preveli Monastery.

Finally, Ambassador Spyrou followed in the footsteps of the ANZACs, as they retreated from Chania across the plain of Askifou and over the mountains to the evacuation site at Chora Sfakion.

Share
Facebook
Email
Twitter
Pinterest
Linkedin
WhatsApp
Viber
Print
Previous articleArtefacts found in Lord Elgin’s sunken ship off the coast of Kythera
Next article‘It’s all about cooking delicious food and lots of it’: Sophie Stokes take us ‘In Sofia’s Kitchen’