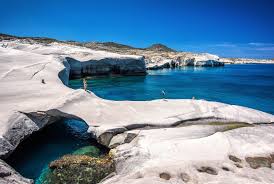 The Cycladic island of Milos has been voted the ‘Best Island of Europe’ for 2019 by readers of the foremost U.S. travel magazine “Travel and Leisure”, with three more Greek islands – Crete, Paros and Santorini, respectively – occupying second, fourth and fifth positions in the same category.

Greece “rules the list” according to the author of the article “The Top 15 Islands in Europe,” with four islands in the top five. About Milos, she notes that the famous ‘Venus de Milo’ statue was found there while present attractions include its traditional Cycladic villages, volcanic craters, ruins, white sand beaches and turquoise waters – plus being affordable and largely free of the crowds seen on other Greek islands.

The four Greek islands also occupy prominent positions on the ‘Best Islands in the World’ list, where Milos ranks fourth, Crete seventh, Paros 11th and Santorini 14th. Among their advantages, according to readers, are their natural beauty, fine food and ancient civilisation.

The prizes will be awarded on July 16 in New York, with the prize for Milos to be accepted by the deputy head of the U.S. National Tourism Organisation office, Maria Kritharioti.