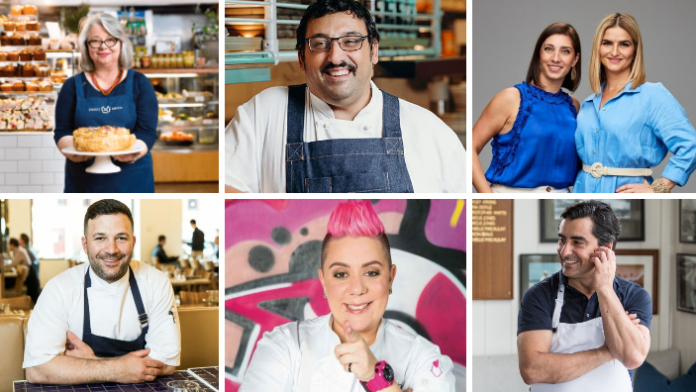 Today, on International Chefs Day, we are celebrate remarkable chefs around the world and the many things they teach us about different cuisines and delicacies.

We’ve listed some of the top Greek Australian chefs who have made significant contributions to the Australian food landscape.

When people think of Greek Australian chef, David Tsirekas, three words always come to mind – passionate, hard-working and a go-getter. That’s because despite experiencing the highs and lows of working in the hospitality industry, Tsirekas has still managed to successfully bring some of the quirkiest Greek dishes to the Australian cuisine scene.

This quirkiness all started back in 1997, when Tsirekas was first offered his sister’s partnership at Perama restaurant in Petersham. The restaurant won multiple Sydney Morning Herald good food guide hats until it eventually closed in 2011.

READ MORE: Chef, David Tsirekas, rises from the ashes with a new restaurant and outlook on life.

Tsirekas later moved onto Xanthi Greek restaurant, which had the largest wine list in the Southern Hemisphere. But ultimately, the high-pressure environment saw Tsirekas’ dream sadly come crashing down and he had to close the restaurant in 2014.

Since the closure of Xanthi, Tsirekas has been the Executive Chef at Universal Hotels, working on the development of the restaurant 1821, and he has also held a number of consultant roles for venues in Chicago, The Greek Club in Brisbane and Zeus Street Greek.

Now, he’s focused on bringing Perama restaurant back as Perama 2.0.

In September 2020, thousands of Greek Australians across the nation erupted in applause as Dezi Madafferi and Penny Kerasiotis from Team Greece were crowned champions of Channel 7’s cooking show, Plate of Origin.

Just one short year later and the Greek cousins say that once they entered the cooking competition together their lives altered forever.

In January this year, Penny extended her shop Miss Penny Cakes in Melbourne and has created a few Greek cake mixes such as coconut syrup cake and kourabiethes, as well as other staples including chocolate cake, vanilla cake and cookie mixes.

Dezi, who worked for Country Road for 20 years, also decided to launch her own seasoning range which includes her best-selling ‘Gyro Gyro Souvlaki’ seasoning. The seasonings can now be found in 12 Victorian stores, one Queensland store and online.

READ MORE: Dezi and Penny from Team Greece share what life is like after Plate of Origin.

Matt Germanchis has worked in some of Melbourne’s most prestigious restaurants, including Pei Modern, Movida, The Press Club and Pandora.

But in 2016, he and partner Gemma Gange swapped the CBD for the Surf Coast, opening Captain Moonlite, a now-closed seafood-centric diner that quickly became a top Victorian restaurant.

Its enduring, ever-popular offshoot, Fish by Moonlite, is a fish’n’chipper that punches well above its weight.

More recently, he’s also added executive chef at the Lorne Hotel to his resume and in an interview with Broadsheet, he says people can expect to see him work “with seafood.”

Award winning pastry chef, Anna Polyviou, has made quite a name for herself in Australia’s dessert scene.

Polyviou began working at the Hotel Sofitel in Melbourne and has created a successful career in the hotel world. Polyviou is credited for Sydney Shangri La’s renowned culinary reputation, where she has created legendary, unique dessert experiences.

In 2014, Polyviou won the award for best dessert in Australia for her modern reimagination of the traditional carrot cake. Since then, Anna has published her first cookbook, ‘Sweet Street,’ and has featured as a guest judge on Masterchef Australia.

Brisbane export, Alex Xinis, has returned home after years abroad. Whilst overseas, he did a two-year stint at two-Michelin-starred restaurant, Funky Gourmet, in Athens and more recently, was executive chef for Modern Greek Food Group in London.

When in Australia he headed up Melbourne Greek institutions Press Club and Hellenic Republic before launching his own meal-delivery venture, Almost Like Yiayias, last year.

Considered Melbourne’s dessert hero, Kathy Tsaples is a passionate Greek chef with an inspiring success story. She grew up learning all about traditional Greek food and culture from her family.

After overcoming stage three breast cancer and releasing her first cookbook, Tsaples went on to open her ‘Sweet Greek’ store in Melbourne’s Prahan Markets and has since published a second cookbook.