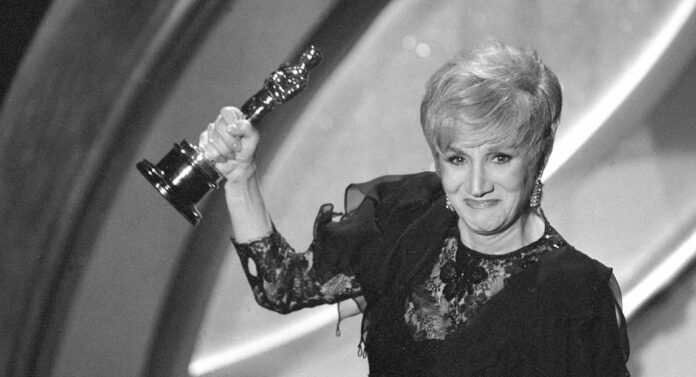 Olympia Dukakis, a character actress who won an Oscar for her role as an overbearing mother in the romantic comedy “Moonstruck,” died Saturday at the age of 89.

The passing of the theater veteran, who made a name for herself in film late in her career, was confirmed on Facebook by her brother Apollo.

“My beloved sister, Olympia Dukakis, passed away this morning in New York City,” he wrote. “After many months of failing health she is finally at peace and with her [husband] Louis [Zorich].” The cause of death was not immediately given.

Dukakis was born in Lowell, Massachusetts, to Greek emigrant parents, with her father originally from Anatolia and her mother from the Peloponnese. The Greek American actress said she grew up with pressures within her Greek family and around her “in a neighborhood where ethnic discrimination, particularly against Greeks, was routine.”

Dukakis won the Oscar for best supporting actress for her work in “Moonstruck” (1987) as the scornful mother of a young widow played by Cher. It also earned Dukakis a Golden Globe and a BAFTA nomination.

By 1988, with her Oscar, Dukakis was a household name in America because of the award and because her cousin Michael Dukakis had won the Democratic presidential nomination.

Olympia Dukakis is survived by the daughter and two sons she had with Zorich, who died in 2018.