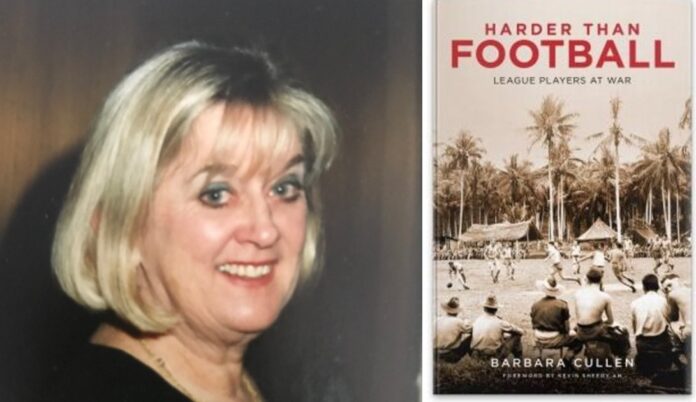 Barbara Cullen will present a lecture entitled Battle of Crete veterans that played AFL, on Thursday 6 May at 7pm, at the Greece Centre, as part of the Greek History and Culture Seminars, offered by the Greek Community of Melbourne.

Over 2500 AFL/VFL players served from 1897 until the end of National Service in 1972. Of these men, 22 players from various VFL/AFL football clubs served in Greece and Crete during WW2 and sadly five of those players died on active service. Three in Greece or Crete and the other two in New Guinea and Australia.

This tribute to all who served in Greece and Crete on the 80th anniversary of the Battle of Crete explores their football careers, their service to Australia and as brave men who were loved sons, brothers, fathers and mates. They came from all walks of life and represented Australian sport and service to their country.

Barbara’s life has always been intertwined with football history and war service. Her great uncle (KIA) and grandfather both served in WW1 and her father served in the RAAF during WW2. Another great uncle was a premiership Captain /Coach of Geelong Football Club and her father and brothers both coached and played.

After a twenty year career in education her work took a major turn when she was made Manager/Curator of the Essendon Football Club Hall of Fame in 1996. In 2006 she was honoured as AFL Football Woman of the Year for her service to football history.

For the past 11 years she has been managing the football archival collections of North Melbourne and Sydney Swans Football Clubs, and has been secretary of the Australia Football Heritage Group for the past 25 years.

Her book “Harder than Football” published in 2015, which took 6 years of research, documents and pays tribute to the war service of 2500 AFL/VFL footballers in the Boer War, WW1 ,WW2, Korea, Vietnam and National Service. This includes the 22 players who served in Greece and Crete during WW2.