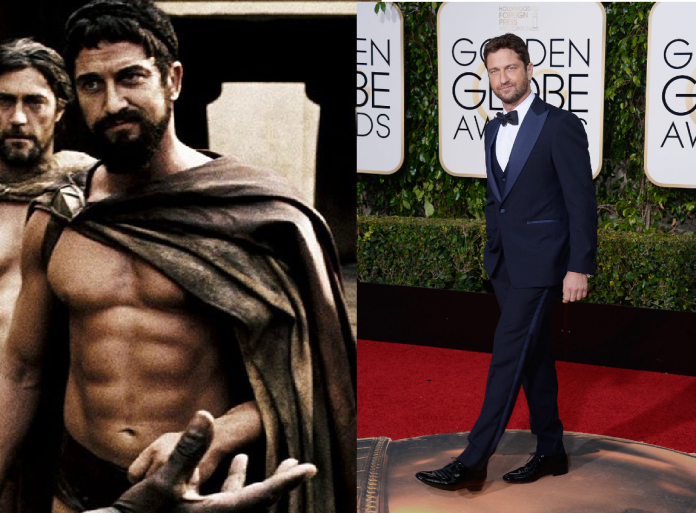 Actor Gerard Butler is famously recognised as playing the legendary King Leonidas in the 2006 film ‘300‘. In the film, we saw the actor truly get immersed in the role of the Greek King, as he flexed a ridiculous physique and six-pack abs.

“You know that every bead of sweat falling off your head, every weight you’ve pumped — the history of that is all in your eyes,” says Butler on preparing for the role. “That was a great thing, to put on that cape and put on that helmet, and not have to think, Shit, I should have trained more.”

While people are stuck inside the house, what better excuse than to finally allocate some time to strengthening your body and soul.

To get shredded like the Greek warrior himself, here is Gerard Butler’s diet plan and workout routine, used for the 300 film.

Diet Plan – Anyone Can Do It

Gerard Butler shows that anyone can transform in a Spartan warrior. Previously a lawyer, Gerard Butler made a complete career change to become an actor after going down a spiral of bad decisions which he ultimately took control of.

In an interview with Men’s Health he explains:

“You have to understand that I was completely out of control. If I hadn’t been so lost and insane, I’d still be a lawyer. Misery is a sign that something is wrong, that your life is in need of some big changes.

“I haven’t had a drink in more than 12 years,” he continues. “That’s when everything changed for me. That’s when I learned what had to be done to succeed and be happy in life.”

Gerard Butler reveals that cutting alcohol out of his life was the greatest thing for his health, kick starting his intense body routine.

“My diet is still never quite as scheduled as I wish it were, but now I try to eat vegetables and chicken instead of burgers and fries like I used to,” he says in the same interview with Men’s Health.

While Gerard Butler has actually never released his diet plan for the film, here is what his diet plan would most likely have looked like, judging off other workout routines of a similar nature.Insane amounts of protein (which can be found in eggs, grilled chicken, tuna and other fish, steak, protein shakes, and protein bars),

According to Super Hero Jacked, the Spartan 300 Workout was inspired after the number 300. The workout itself is composed of 300 repetitions among the several different movements:

Of course, the workout is subject to change according to people’s overall strength, yet the routine should be followed as shown.

While people recommend that you have to train 5 days per week to gain the physique of King Leonidas, this actually isn’t true. Super Hero Jacked reveals that instead of your typical 5 training days, you will be training like a Spartan for 3. The routine is as follows:

You may of seen cardio on that list more times than you would have liked, yet nobody said training like a Spartan was fun!

If you don’t have equipment to perform these exercises, then experiment with objects in your house! Working out is designed to be flexible, so don’t be afraid to change it up a little bit, as long as your working out the same muscles.