The Orlov Revolt: What you need to know about ‘Greece’s first revolt’ against the Ottoman Empire 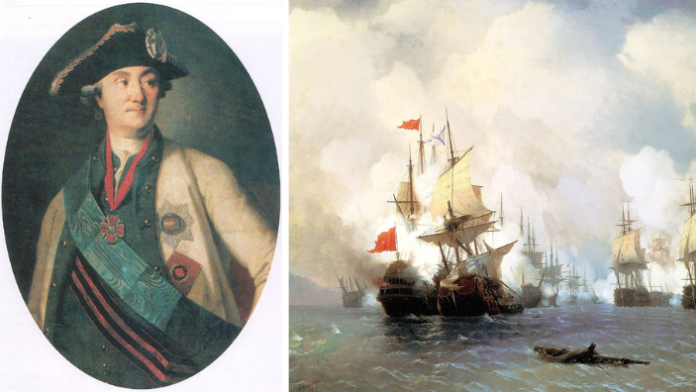 The Orlov Revolt is one of the littlest-known and earliest acts of resistance against Ottoman rule. It served as a percursor to the Greek Revolution and has left an irrepressible mark on Greece and Russia’s history. The Greek Herald looks back 250-odd years ago to give you everything you need to know about the revolt.

The Byzantine Empire drew swiftly to an close with the Ottoman Empire’s siege of Constantinople in 1453.

The Byzantine Empire had held dominion over the eastern half of the Roman Empire for over a millennium and still to this day remains the longest-lasting medieval power.

The Ottoman siege would mark the beginning of over three and a half centuries of Greek revolt and resistance against Ottoman rule, with the Orlov Revolt being one of the most important among them.

What was the Orlov Revolt?

The Orlov Revolt was an unsuccessful, more than year-long joint Greek-Russian revolt against Ottoman rule that occurred in the Peloponnese, Crete, and Epirus, between February 1770 and June 1771.

It is described as the ‘first Greek revolution’ and a landmark event in the development of the Philhellenism movement.

The name ‘Orlov’ denotes Admiral for the Russian Navy Alexey Orlov’s arrival in the Mani Peninsula which kicked off the revolt.

The Ottoman government, known as the ‘Porte’, declared the first of many wars with Russia in October 1768.

They declared war against Russia for many reasons, including their power struggle in Poland-Lithuania.

A plan was brewing north-east of the equator.

The announcement prompted Catherine the Great, reigning as Empress of All Russia, to enact her ‘Greek Plan’.

Her ‘Greek Plan’ attempted to assist the Greeks in wresting control over the Eastern Mediterranean from the Ottomans. It attempted to revive the Byzantine Empire along with establishing a new pro-Russian puppet Greek state.

It had solidarity amongst Orthodox adherents in its spirit and was proposed as a solution to the ‘Eastern Question’. The Eastern Question was about sharing Ottoman land and its influence among major European powers.

In the meantime, war was kicking off. Russian emissaries, including Grigorios Papadopoulos and Georgios Papazolis, were arriving in Mani, in southern Greece, as early as the mid-1760s to gauge local support for the revolt, as well as in Bosnia, Herzegovina, Montenegro, Albania, Crete, and the Morea.

Notably, they found large support in Grigory and Alexei Orlov, with the latter delegated Russian fleet commander, in preparations for an insurrection in the Morea; Kalamata local Panagiotis Benakis; and Cretan shipping magnate John Vlachos ‘Daskalogiannis’, who led the Cretan revolt.

The Ottomans retaliated by hiring Muslim Albanian mercenaries to fend off the revolt and destroyed large sections of Epirus, Patras, Mystras, during and after the War.

The Ottoman forces eventually overpowered the Greek and Russian revolutionaries and the revolt slowly dwindled.

Public executions, mass murder, and child slave trafficking were rife in the years following the aftermath.

Havoc ensued as the Porte neglected their mercenaries in Greece. This is until the damage hit breaking point and the Treaty of Küçük Kaynarca brought an end to the war, allowing the mercenaries to retreat home.

The Orlov revolt, and in particular the ‘Greek Plan’, impacted Russia’s history and international recognition well into the 20th century.

The Treaty of Küçük Kaynarca gave Russia certain privileges to protect the Orthodox, including Greek Orthodox, population, as well as appoint Greek Orthodox Christians to be its consuls.

These areas became centers dominated by Ottoman-Greek immigrants and their Greek-Russian succesors.

They would play prominent roles in the history of Greece and the Greeks until their destruction in the 1930s.