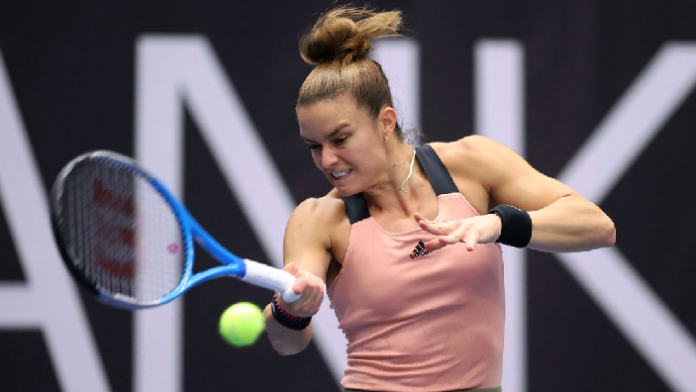 It was an eventful game at the CEZ Arena of Ostrava as Maria Sakkari beat the Latvian Jelena Ostapenko 6-4, 6-2, to claim a position within the last eight of the city’s greatest tennis tournament.

Tensions began to rise during the first set, as the Greek athlete made the break on Ostapenko, causing the 24-year-old to lash out in frustration and curse her opponent. Sakkari asked the game officials to take note of the incident and went as far as bringing it to the attention of the game supervisor.

Once things calmed down and the game resumed, the 26-year-old from Athens began the… onslaught of her opponent, who seemed helpless to stop Sakkari’s powerful serve.

Now concentrating fully on the events unfolding inside the court, the Greek was able to win the first set comfortably 6-4, keeping Ostapenko under pressure throughout the encounter.

Things continued in the same manner in the second set, with Sakkari finding the break immediately and winning the points during her own serves with no problems, as the Latvian couldn’t come up with any response to her fast-swinging balls.

It came as no shock that the world number 12 came out on top in the second set, 6-2, winning the match and sealing her spot in today’s quarter-final.

According to Sakkari’s statements during the post-match press conference, Jelena Ostapenko apologised for her behaviour during the game, while adding that the Ostrava Open is a tournament that she enjoys.

Sakkari to face Martincova in next round

The 26-year-old will now go up against the Czech player Tereza Martincova in the quarter-finals.

The 26-year-old from Prague made the upset in her last game, beating world number 13 Anastasia Pavlyuchenkova in a heated encounter that ended with two tie-breakers, 7-6 (7-5), 7-6 (8-6).

Martincova is sure to have the home crowd support, in a game that is set to be held tonight (September 24) at 10pm (AEST.)