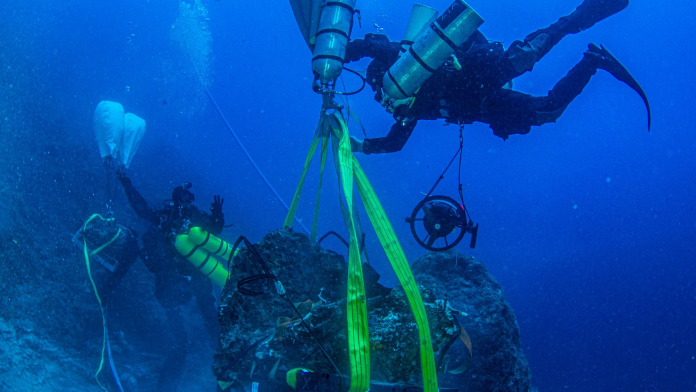 During the most recent digging expedition of the Antikythera island shipwreck, the discovery of a ‘greater-than-life size’ marble head was made along with two human teeth embedded in a compact mass with copper traces.

The excavation of the shipwreck took place on May 23- June 15 and the marble head has since been identified as the Farnese type of Hercules. The statue piece has been matched to the headless statue no. 5742 at the National Archeological Museum that was found by sponge divers in 1900.

The recent excavation is a part of a five-year program, from 2021-2025, at the well-known shipwreck site that aims to recover as many artefacts as it can.

The program was responsible for the discovery of the Antikythera Mechanism, an ancient calculation system, several bronze and marble statues and an emblematic exhibit of the National Museum.

Other findings also included a lot of objects from the ship’s equipment, including copper and iron nails, and shapeless metal agglomerations covered by a crust of frozen water.

The Antikythera shipwreck is the richest ancient wreck ever discovered and according to the site dedicated to the project, was discovered by Greek sponge divers in 1900.

After salvage operations were conducted by the Hellenic Navy that resulted in the discovery of statues and the Mechanism, underwater explorer Jacques-Yves Cousteau began diving with the approval of the Greek government in 1976 and systematic excavations began in 2012.