On This Day in 1969: Stratis Myrivilis, anti-war novelist, passed away 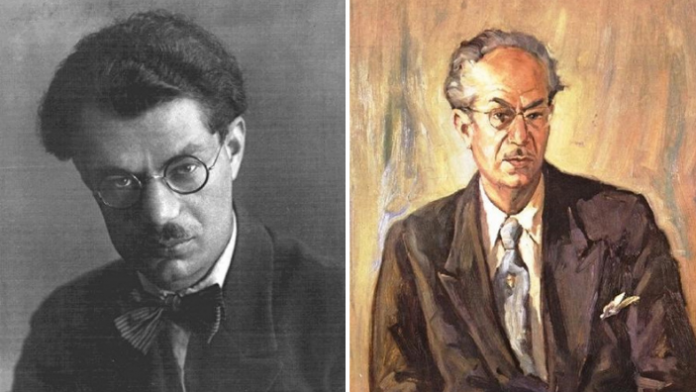 Efstathios Stamatopoulos is best-known for his novels, novellas, and short tales written under the pen name Stratis Myrivilis.

He is considered a member of the ‘Generation of the 1930s’ and was nominated three times for the Nobel Prize in Literature.

The Greek Herald delves into the life and motivations of the anti-war novelist, examines his insights and sentiments, and charts his rise as one of the most influential writers of Greece in the 20th century.

Born as Efstathios Stamatopoulos on 30 June, 1890, Stratis was a Greek writer. He became known with the artistic nickname Myrivilis, a name of the mountain slope above his paternal home.

In 1890, Myrivilis was born in the municipality of Sykamineas on the north shore of the island of Lesbos. He spent his youth there until 1905, when he was transferred to Mytilene, the island’s capital, to study at the secondary school.

In 1910, he completed his education and accepted a position as a local schoolmaster, but after only one year, he resigned and enrolled at Athens University to study law. However, his academic studies were cut short when he enlisted to participate in the First Balkan War in 1912.

Following the Balkan Wars, he returned to Lesbos, which was now free of Turkish occupation, and rejoined with his country Greece. He established himself as a journalist, poet, and fiction writer there.

‘Red Stories’ marks his debut in the literary scene in 1915:

In 1915, he released his debut book, Red Stories (‘Κόκκινες Ιστορίες’), which consisted of six short stories that together made one novel. Five years later, in 1920, Myrivilis married Eleni, and together, they had three kids.

During World War I, Myrivilis served in the army of Eleftherios Venizelos’ a breakaway government on the Macedonian Front. He also served in the Asia Minor Campaign, which catastrophically failed, following this he returned to Lesbos.

From April 1923 to January 1924, Myrivilis wrote and published his first version of his First World War novel “Life in the Tomb” in the weekly newspaper Kambana. In the novel, Myrivills shows his personal impressions and of World war 1 through the protagonist Antonis Kostoulas. Antonis records in his letters experiences, thoughts and feelings, during the period, that he is fighting on the Macedonian Front in 1917 and later he intends to send to his beloved wife.

In 1930, a more extended, updated version was published in Athens, and Myrivilis quickly became popular across Greece. “Life in the Tomb” established him as a true master of Greek prose. Following the popularity of Life in the Tomb, Myrivilis relocated to Athens and worked as the editor of the daily newspaper Demokratia.

He was appointed General Programme Director of the Greek National Broadcasting Institute in 1936, a position he held until 1951. Although during the time of German occupation, he resigned, following a final broadcast in which he reminded the Greek people of their noble resistance to the Italian invasion of Greece and encouraged them to continue resisting with dignity and unity.

Following the occupation, he was recruited to the Library of Parliament.

In 1946, he created and was elected as the first president of the National Society of Greek Writers.

After being nominated unsuccessfully six times, he was eventually welcomed to the Academy of Athens in 1958, a belated appreciation of his significant contribution to Greek literature.