On this day in 1821, Greeks engaged in the Battle of Alamana 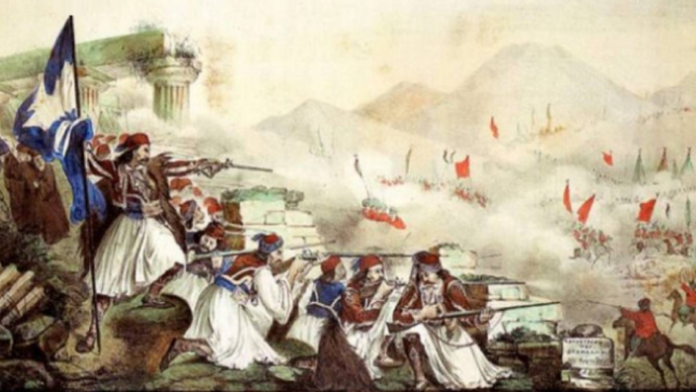 The Battle of Alamana was a battle during the Greek War of Independence which took place on the 23rd of April 1821 in Thermopylae, which is famous for many battles, including the Persians, Ottomans and the Bulgarians. Although the battle was unsuccessful it taught the Greeks traits of heroism, patriotism and nationalism.

This battle was initiated after Livadeia fell to Greek fighters on the 1st of April. The fight was under the command of Athanasios Diakos and Vasilis Bousgos. This would lead to a retaliation of by Hursid Pasha in order to reclaim the area of Roumeli (central Greece at the time) and proceed to the Peloponnese to Tripoli.

The Ottoman advanced was halted due to the Greek fighters taking defensive positions into three sections. The force had about 1,500 men. There was defensive posts at the bridge in Gorgopotamos, the heights of Halkomata and at the bridge at Alamana.

Their Ottomans set up camp in Lianokladi. The Ottomans would hit back and attack the 3 posts in which the Greeks set up, with a real emphasis on the bridge at Alamana. This was due to many of the Greek rebels already fleeing. Diakos was at the bridge and continued the fight with 48 men, despite being told to retreat, until after many hours, Diakos was wounded in battle and captured. Diakos was confronted by Kiose Mehmet and Omer.

Athanasios Diakos is known as a true hero to Greek patriotism. Upon being asked to join the Ottoman army. And denouncing his faith, Diakos responded with “I was born a Greek, and I will die a Greek”. A true testament to the attitude of the fighter. Diakos was ordered to be impaled, and onlookers said they heard him sing, in reference to the Greek uprising against the Ottoman Empire. His death showed the brutal nature of the Ottomans.

This battle was a catalyst for Greeks to continue fighting for independence, and to continue to keep their Christian faith and nationalism.