Nick Karagiannis surprises grandmother whose car was crushed by council 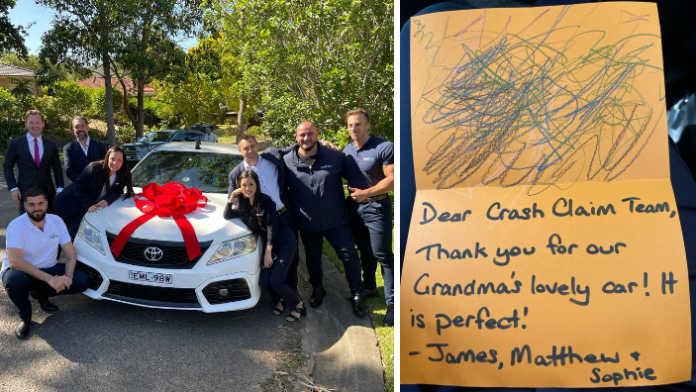 For more than three months, 61-year-old, Wendy Tucker, has had to borrow her daughter’s car to get to work after the Central Coast Council accidently crushed her 1997 Toyota Camry Conquest.

The Toyota was parked outside her daughter’s home at Point Clare for eight weeks during the lockdown but after a neighbour complained that the vehicle had been parked illegally, the Council assumed it had been abandoned, removed the vehicle and crushed it without contacting Wendy.

Despite this, the hardworking grandmother has finally had some good news.

After her story aired on A Current Affair, Nick Karagiannis and his team at Crash Claim presented Wendy with a 2012 Toyota Aurion, a baby seat, flowers and a $2,000 cheque to help with insurance and other things she needed.

“We were absolutely overwhelmed with your story and having that happen to you after such a tough year. So me and my crew got together – The Crash Claim crew – and got you a little something for Christmas that should put a smile on your face,” Mr Karagiannis said while handing over the keys to the car.

Wendy was over the moon when she caught sight of her new car, wrapped in a bright red ribbon.

“Thank you so much,” she said. “It’s beautiful, it really is beautiful.”

Since the car had been delivered by Karagiannis and his team, Wendy has also been given $3000 from Central Coast Council, according to a media release by Crash Claim.