On this day: The destruction of Psara 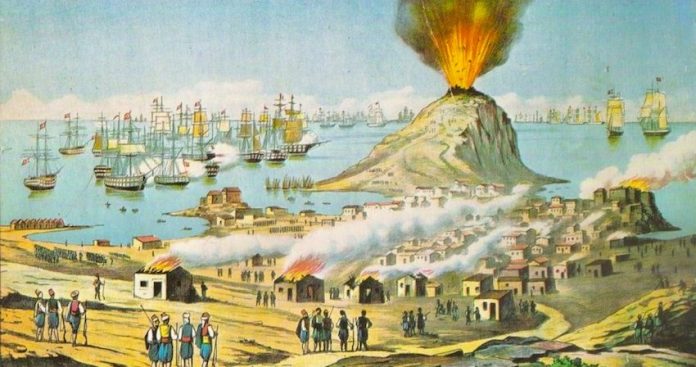 On the morning of June 20, 1824, the Turkish fleet began the destruction of Psarra, signifying one of the biggest blows to the revolutionary effort.

The Turkish fleet comprised of 176 ships (warships and transports), carrying 17,000 Turkish and Albanian troops. The forces defending Psara included 1,300 Psarians, 700 refugee troops, and 1,027 mercenaries from Macedonia and Thessaly. The island’s 100 ships were a sizeable force that posed a thorn in Turkish naval operations.

The beaches were organised with cannon emplacements and trenches. All defences were prepared well, apart from one tragic mistake. In trying to placate the mercenaries, the locals agreed to remove the rudders from their significant fleet, thus rendering their ships useless.

Despite strong naval bombardment, the Turks were unable to land their troops on the Greek island. However, naval scouts found they could disembark at an area called Cavo Markaki.

They then disembarked and proceeded to destroy the islands defenders. Very quickly they began the systematic roundup and slaughter of the inhabitants. Horrific scenes ensued, with streets strewn with the corpses of old men, women and children.

Read More: On This Day in 1944, 228 innocent Greeks were killed in the Distomo massacre

With the rudders removed from the ships, villagers were left unable to escape.

Read More: On This Day: The Fall of Constantinople

Of the 30,000 inhabitants, 18,000 were massacred or sold as slaves. Of the 100 or so Psarian ships, only 16 managed to escape along with seven fireships under Konstantinos Kanaris.

The destruction of Psara dealt a serious blow to the revolutionary effort as it destroyed a very vital portion of the Greek navy.