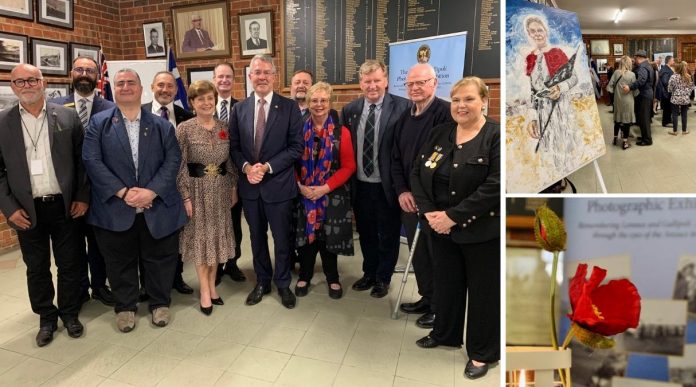 A collection of high-resolution images from 1915 taken by soldiers, nurses and doctors during their time in Lemnos, prior to, during and after the Battle of Gallipoli have found a permanent home at the Lemnian Community of Victoria’s facility in Braeside.

Sourced from collections in war memorials and museums, libraries and universities from across Australia by the Lemnos Gallipoli Commemorative Committee (LGCC) the photographs were formally handed over to The Lemnian Community of Victoria on Monday, April 25 – Anzac Day, in an emotional event attended by members of the Greek and the wider community, federal and state Politicians and local Council representatives.

Welcoming the attendees, Commemorative Committee Vice President, Christina Despoteris, said that despite challenges the organisation has faced over the years “with dialogue and good will anything and everything is possible.”

With a brief speech President of the Lemnian Community of Victoria, Philip Diamataris, thanked the LGCC and said that “it’s an honour and privilege” for his community to host the ‘exhibition which links Australia and Greece.

Mayor of the City of Kingston, Steve Staikos and Federal Member for Isaaks, Mark Dreyfus representing the Leader of the Opposition, Anthony Albanese, also addressed the attendees.

“Anzac Day is a solemn day for us all, but this exhibition is quite different. It shows in photographic form that even in the horror of the war the seeds of something wonderful can be sown,” Mr Dreyfus said.

Lemnos Gallipoli Commemorative Committee, Lee Tarlamis MP, State Member for the South Eastern Metropolitan Region explained that this exhibition played a key role in the Committee’s campaign to both raise awareness of Lemnos’ role in Gallipoli but also in the fundraising efforts for the Lemnos Gallipoli Memorial that was erected in Lemnos Square, Albert Park.

“Now the exhibition has finally come home to where it belongs, to the heart of Melbourne’s – and dare I say Australia’s – Lemnian community,” Mr Tarlamis said and expressed his gratitude to LGCC committee member and historian, Jim Claven for creating the photographic display.

Curator, Jim Claven, thanked Secretary General of the World Hellenic Interparliamentary Association, John Pandazopoulos, who was in attendance for urging him to research the role of Lemnos in Australia’s Anzac story and said that “all of these photographs show the breadth and depth of Lemnos role in Gallipoli.”

“Without Lemnos there would have been no Gallipoli campaign and you cannot remember Australia’s Anzac story without remembering Lemnos’ part in its birth,” said Mr Claven.

“I like to think that the exhibition encapsulates Lemnos’ part in Australia’s Anzac story, as the most significant interaction between Australians and Hellenes in Greece, combining an Australian and a Greek story – as indeed you yourselves do through your own migration stories.”

The event concluded with an Anzac poem written by Lemnian Community member Stavroula Bezas and the official handover of the photographs.