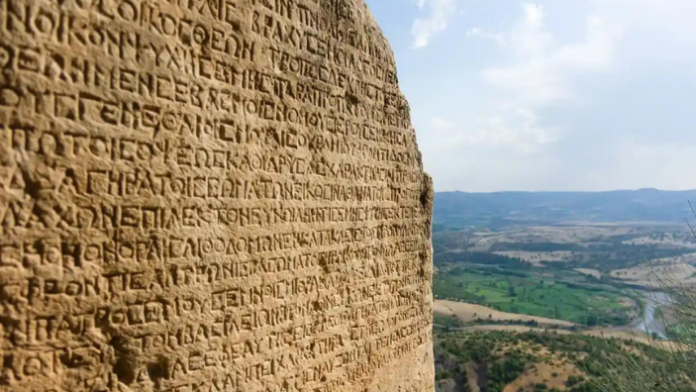 The use of Artificial Intelligence (AI) could be the answer researchers have been looking for in the search for a way to fill the gaps of ancient Greek texts. After developing a system with the assistance of AI, nicknamed ‘Ithaca,’ researchers revealed the system can pinpoint parts of different texts to when and where they are from.

Dr Thea Sommerschield is a co-author of the research that has been conducted at Ca’ Foscari University of Venice and Harvard University, and along with her colleagues developed this ground-breaking system.

Dr Sommerschield has said that the significance of these inscriptions lies completely in the fact that they were written directly by ancient people, and they are evidence of the thought, language, and history of past civilisations.

“Most surviving inscriptions have been damaged over the centuries. So, their texts are now fragmentary or illegible,” said Dr Sommerschield, adding that they may also have been moved from their original location.

According to their writings in the journal Nature, throughout the time of testing ‘Ithaca,’ more than 63,000 transcribed ancient Greek inscriptions were fed into Ithaca, enabling it to pick out patterns in the order of letter and words.

After tuning the system, a further 7,811 inscriptions were fed into it as an experiment to see if it could accurately suggest where they were form and propose a range of letters and words to fill in artificially created gaps.

The journal revealed that ‘Ithaca’ achieved 62% accuracy when used alone and 72% accuracy when the system’s suggestions were interpreted by a historian. The system was also able to date the inscriptions to within 30 years of their established date and correctly identified their provenance 71% of the time.

“Just as microscopes and telescopes have extended the range of what scientists can do today, Ithaca aims to singularly augment and expand the capabilities to study one of the most significant periods of human history,” said Dr Yannis Assael, a co-author of the work conducted on ‘Ithaca’.

It is claimed by the team that the approach could be used for any medium and any ancient written language, from Latin to Cuneiform (a logo-syllabic script that was used to write several languages of the Ancient Near East – Regions such as the modern Middle East) and It may also be possible to train ‘Ithaca’ to dissect Greek literary texts written on fragments of papyrus.

Professor Peter Liddel is an expert on Greek History and epigraphy at the University of Manchester and he was not involved in this research but said even the source of many of the ‘Elgin marbles’ was unclear.

“The application of AI through Ithaca certainly has the potential to contribute to the toolbox of historians involved in analysing ancient texts and using them to understand processes like the development of imperialism or the nature of cult activity,” said Professor Liddel.

Like many scholars, Professor Liddel went on to warn “AI is only powerful as a tool to help us ask questions about, and make comparisons to, the existing evidence.”