On This Day in 1789: Rigas Feraios, Greek Revolution forerunner, dies 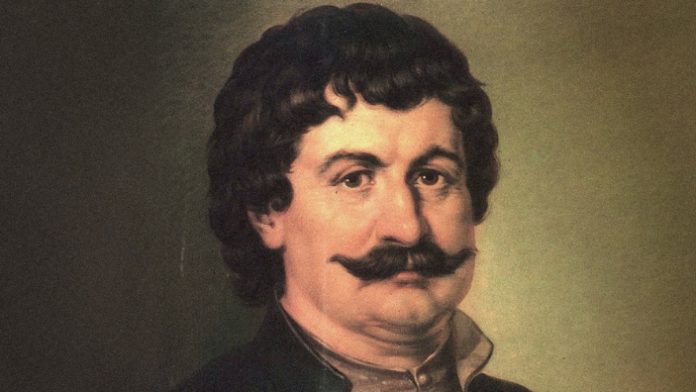 Rigas Feraios was a Modern Greek writer, political theorist, and rebel. Rigas Feraios is honored as a Greek national hero as a victim of the Balkan rebellion against the Ottomans and a pioneer of the Greek War of Independence.

Antonios Kyriazis (“Rigas”) was born in 1757 to a rich family in the village of Velestino, Thessaly, Greece (then part of the Ottoman Empire), near ancient Pherae. He was given the nickname Pheraeos or Feraios from the ancient Greek city of “Pherae”, this nickname was given to him by others, and he does not appear to have used this name himself.

During his early life, Rigas achieved and experienced many amazing things, including living in a monastic community in Mount Athos, working in Constantinople, and studying in Bucharest. Among his worldly journies Rigas learnt of the French revolution and believed that something similar could happen in the Balkans. This inspired Rigas to travel to Vienna in 1792. At that time, Vienna was the capital of the Holy Roman Empire, his trip was as part of an effort to seek help and support from French general Napoleon Bonaparte.

During his time in the city, he operated a Greek-language daily newspaper called Efimeris (i.e. Daily), as the city of Vienna had a large Greek community. He published a suggested political map of Great Greece, this map included Constantinople and many other areas as part of Great Greece even if Greeks were in the minority in those areas.

Rigas started his campaign for Revolution by printing brochures and flyers based on the ideology of the French Revolution, such as the Declaration of the Rights of Man and the New Political Constitution of the Inhabitants of Rumeli, Asia Minor, the Aegean Islands, and the principalities of Moldavia and Wallachia. These brochures were planned to be given to the public to spark a Pan-Balkan revolt against the Ottomans

Rigas did speak with Commander Napoleon Bonaparte and tried to gain the commander’s trust and loyalty. One notable thing Rigas did was send Napoleon some tobacco made from the root of a Bay Laurel retrieved from a destroyed temple of Apollo. In addition, to help from the French, Rigas aimed for help from Italy and set out for Venice to see the general of the Army of Italy. On his way to Venice, he was tricked by a Greek merchant named Demetrios Oikonomos Kozanites, a Greek merchant. Rigas had his documents taken and was detained by Austrian police in Trieste (Austria was an ally of the Ottoman empire and they were concerned the French Revolution might incite similar violence in its land). Rigos and his companions were handed over to the Ottoman governor of Belgrade, where they were imprisoned and tortured.

During his transfer from Belgrade to Constantinople, Rigas and his five associates were murdered, to avoid the possibility of being rescued by Osman Pazvantoglu, a friend of Rigas. The remains of bodies were dumped into the Danube. Rigas Feraios’s final words were believed to be, “I have sown a bountiful seed; the hour is approaching when my nation will enjoy its wonderful fruits.”