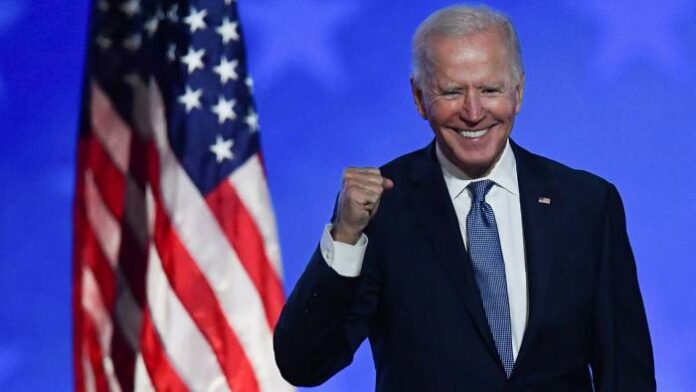 Joe Biden will become the 46th president of the United States after winning the critical state of Pennsylvania, bringing an end to Donald Trump’s presidency.

After an excruciating four-day count, Biden’s childhood home state of Pennsylvania was called for the long-term Delaware senator and Obama administration vice-president.

Biden said in a statement: “I am honoured and humbled by the trust the American people have placed in me and in Vice President-elect Harris.

“In the face of unprecedented obstacles, a record number of Americans voted, proving once again, that democracy beats deep in the heart of America. With the campaign over, it’s time to put the anger and the harsh rhetoric behind us and come together as a nation.”

The streets of Democratic-leaning cities such as Washington DC and New York immediately erupted with honking and cheers when media outlets announced Biden as the nation’s President-elect.

For the first time in US history a woman has been projected to be elected to the executive branch of the United States Government.

Kamala Harris, 56, is expected to become the next Vice-President after Democratic presidential candidate Joe Biden won the US election.

Ms Harris will also become the second person of colour to be elected either president or vice-president.

Her place in history will be confirmed if she is voted by the electoral college in December.

Since the presidential office of the United States was formed in 1789, 92 men have held the position of either president or vice-president.

Of those, only Barack Obama was a person of colour.

Ms Harris had been a senator from California since 2017.

She made an immediate impact on the US political scene, regularly questioning Donald Trump’s cabinet appointees during confirmation hearings.

Before that, Ms Harris served as a district attorney for San Francisco and as California’s attorney-general.

Congratulations from Morrison and Mitsotakis

“Congratulations to US President-Elect Joe Biden. Joe Biden has been a true friend of Greece and I’m certain that under his presidency the relationship between our countries will grow even stronger.”

This was followed by Australia’s Prime Minister, Scott Morrison, releasing a statement also emphasising Australia’s closeness to the US.

Biden – who will be 78 on inauguration day, January 20 – will become the oldest sitting president in US history.