On This Day in 1973: Famous Greek novelist, Elias Venezis, passed away 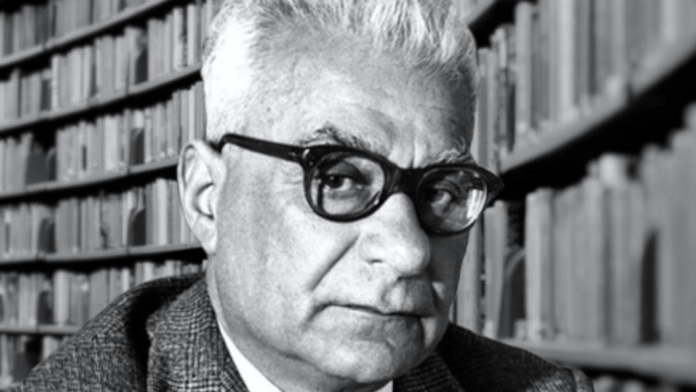 Elias Venezis was a Greek novelist and one of the most important of the literary generation of 1930. His work captured the life of Hellenes in Asia Minor and he had a number of major novels including, ‘The Number 31328,’ ‘Peace’ and ‘Aeolian Earth.’

To mark the day of his passing, we take a look back at this novelist’s incredible life achievements.

Elias Mellos, as was his paternal surname, was born on March 4, 1904 in Kydonies (Ayvalik) of Asia Minor. Venezis was the surname of Elias’ grandfather, which he adopted as a literary pseudonym.

Venezis was one of seven children of the landowner Michael Mellos, originally from Cephalonia, and Vasiliki Bibella, daughter of the magnate Giannakos Bibella.

With the outbreak of World War I, his family fled to Mytilene, his mother’s place of origin, when the Turks began persecuting Christians. There, Venezis spent his first high school years, studying during the day and working at night.

After the end of the war, Venezis returned to Ayvalik and began studying higher mathematics to study engineering in France. However, the Asia Minor catastrophe and the exodus of the Greeks of Asia Minor overturned his plans.

When the Turks captured Ayvalik, they captured him along with 3,000 other Greeks and took him prisoner inside Asia Minor to work in the infamous “Labor Battalions.”

There, Venezis suffered unimaginable suffering for 14 months, which he described in his book ‘Number 31328,’ published in 1931. This number was the number with which he was registered in the “Labor Battalions.”

The inhuman conditions of captivity (he was one of only 23 of his fellow citizens who survived) and the uprooting from his homeland, left indelible traces on Venezis and influenced his work.

After his rescue, he again took refuge in Mytilene, where he settled and started working for the National Bank. There he met Stratis Myrivilis and the group of writers and artists on the island.

READ MORE: On This Day in 1969: Stratis Myrivilis, anti-war novelist, passed away.

Venezis first appeared in Athenian letters in 1928, after being awarded in the competition of the magazine Nea Estia for his short story ‘Death.’ In the same year, he published his first book, the collection of short stories ‘Manolis Lekkas and other short stories,’ which was well received by the critics of Athens.

In 1938, he married Stavritsa Molyviati, originally from Ayvalik, with whom he had a daughter, Anna.

The following year, the novel ‘Peace’ was published. It is, perhaps, the first book that deals with the issue of the settlement of refugees in Greece with literary competence.

For ‘Galini’ he was honoured in 1940 with the First State Prize for Literature and the Commendation of the Academy of Athens.

On October 28, 1943, the employees of the Bank of Greece had gathered in the great hall of the building to honor the anniversary of “NO,” but also the memory of their colleagues who fell fighting.

The Germans stormed the room and arrested the commander and some officials, including Venezis. He was isolated in “Block C” of Averoff Prison and would be executed if the country’s spiritual world did not intervene in a coordinated manner and demand his release.

From this new tragic experience emerged his only theatrical work ‘Block C.’

At the end of 1943, Venezis published his novel ‘Aeolian Earth,’ the most popular and translated of his works. This novel, written from the point of view of a small child, is an anthem for the lost paradise of his childhood and, at the same time, a chronicle of the Hellenism of Asia Minor before the uprooting.

In 1948, in the midst of the Civil War, Venezis participated in the founding of the anti-communist National Society of Greek Writers and the following year, at the invitation of the US State Department, toured the US for six months, where he gave lectures and interviews.

During the post-war period, Venezis collaborated for many years (1954-1970) with the National Radio Foundation (EIP) in speech programs, while he was a member of the Board of the National Theater, the Opera, the European Writers’ Association, the Hellenic American Union and a founding member of the literary ‘Group of 12.’

In January 1957, the Academy of Athens elected Venezis a regular member of the Order of Letters and Fine Arts and in 1959 he was awarded the Brigadier General of the Order George A.

Venezis died on August 3, 1973, of laryngeal cancer, which he had been diagnosed with two years before.