Georgios Karaiskakis: Hero of the Greek War of Independence 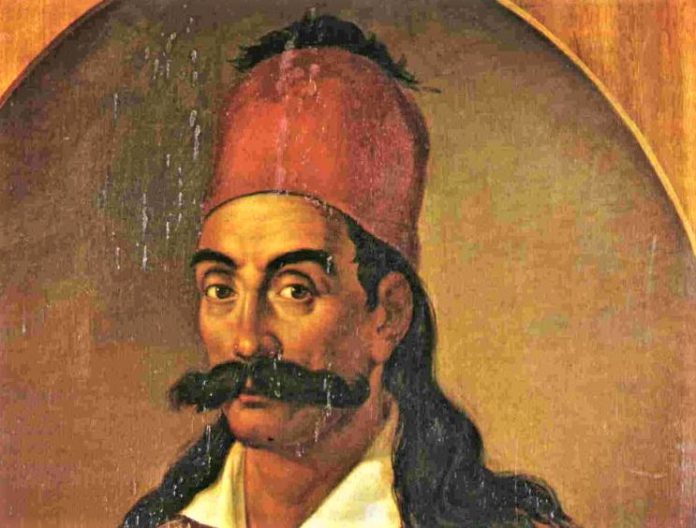 In Greek history, Georgios Karaiskakis has many well-known titles: klepht, armatolos, military commander, and hero of the Greek War of Independence.

Klephts were bandits, warlike mountain folk who lived in the Greek countryside when Greece was still part of the Ottoman Empire. Armatoloi were irregular Greek Christian militia, who were sometimes commissioned by the Ottomans to enforce the Sultan’s authority in regions difficult to govern due to inaccessible terrain.

Both groups switched allegiances according to circumstantial demands. Some were traitors. Many were heroes who helped liberate Greece from more than 400 years of Turkish oppression.

Karaiskakis was one such hero.

Karaiskakis was born in a monastery near the village of Mavrommati in the Agrafa mountains, located in the Prefecture of Thessaly. His father was the armatolos of the Valtos district, Demetris Karaiskos. His mother, Zoe Dimiski, was a local nun.

Known as The Nun’s Son and Gypsy (because of his dark complexion), he became a klepht at a very early age and excelled in the role. Agile, cunning, brave and reckless, he rose quickly through the ranks, eventually becoming a protopalikaro, or lieutenant.

However, at the age of 15, Karaiskakis was captured by Ali Pasha’s troops and imprisoned at Ioannina. Impressed by Karaiskakis’ courage, intelligence and fighting spirit, Ali Pasha released Karaiskakis from prison and made him one of his personal bodyguards.

He served as bodyguard to Ali Pasha for 12 years (1808 – 1820), before losing favor with the Ottoman warlord and fleeing back to the mountains to continue his life as a klepht.

After the war was declared, Karaiskakis quickly became commander-in-chief of the Greek patriotic forces in Rumeli. According to historians, he achieved mixed results in this role: while failing to cooperate effectively with other leaders of the independence movement, he did gain some military successes against the Ottomans.

His most famous victory was at Arachova, where his army crushed a force of Turkish and Albanian troops under Mustafa Bey and Kehagia Bey in November 1826. Victories such as the one in Arachova were especially welcome amid the losses and disasters occurring elsewhere.

Karaiskakis was also involved in the siege of Messolonghi, without much success. He attempted to relieve the second siege, but he got sick and his illness and the lack of discipline among the armatoloi prevented him from providing effective support in the attempt to break through Turkish lines. Few of Messolonghi’s defenders survived.

Karaiskakis was killed in action on his nameday, April 23, 1827, after being fatally wounded by a rifle shell during the siege of the Acropolis.

He was buried on the island of Salamis at the church of Saint Demetrios, according to his express wishes.

Karaiskaki Stadium in Neo Faliro, Piraeus, is named after him.