Turkey is a ‘delinquent’ for oil drilling in the east Mediterranean illegally, says Greek government 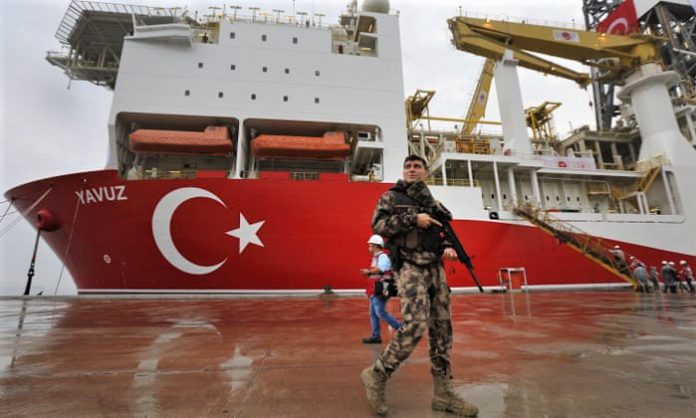 Turkey’s latest act of drilling for oil in the Cypriot Exclusive Economic Zone (EEZ) in the eastern Mediterranean, has elicited harsh reactions from the Greek and Cypriot governments.

In a statement, the Greek Foreign Ministry has accused Turkey of behaving in what it calls “delinquent” fashion, defying international rules and sending an exploratory vessel to drill for oil in waters for which Cyprus alone has rights.

“This new illegal ‘act of piracy’ constitutes a further severe violation of the sovereign rights and jurisdiction of the Republic of Cyprus, contrary to international law,” the Cypriot government stressed in a statement.

But Turkish President, Recep Tayyip Erdogan, insists his government is not breaking any rules as Turkey also has legitimate and sovereign rights to the oil which can be found in the eastern Mediterranean and Aegean Sea.

“The attempts of third parties to act as an international court in determining maritime boundaries is unacceptable,” President Erdogan said after a Cabinet meeting on Monday.

“In this context, the statement… that “there exists Greek Cypriot claims over the area” is neither constructive nor compatible with international law, given the fact that there is no valid maritime delimitation agreement in the region.

“Turkey will continue to defend its rights in those waters. It’s this decisiveness that makes Turkey strong.”

While both are NATO allies, Greece and Turkey have been at loggerheads for ages over conflicting claims to air and sea rights in the Mediterranean and Aegean Sea, the vast waterway that divides the two nations.

Massive gas reserves discovered off the coast of Cyprus in recent years have also complicated relations.

However, experts warn that this latest tactic could result in an accident where tensions spill over into a full-blown conflict.

Share
Facebook
Email
Twitter
Pinterest
Linkedin
WhatsApp
Viber
Print
Previous article#KeepItGreek by tuning in to a Greek audiobook of ‘Harry Potter and the Philosopher’s Stone’
Next articleGeorgios Karaiskakis: Hero of the Greek War of Independence