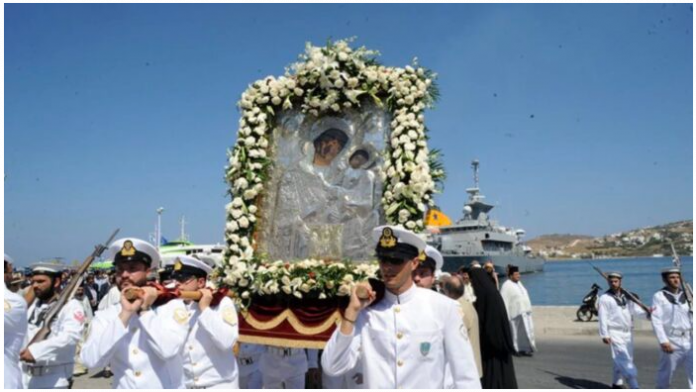 Every year, August 15 holds special significance for all Greeks and that is due to a celebration that serves as the high point of their summer holidays.

On this day, the Christian Orthodox religion celebrates the Dormition of the Virgin Mary who, as Jesus Christ himself, was resurrected to live on forever in heaven.

This day has been hailed as “the Easter of summer” in Greece and the message of hope and victory over death itself has gone on to inspire many people from across the world.

Here are some of the most popular festivities and traditions that take place all around Greece during the August 15th national holiday – also known as ‘dekapentavgoustos.’

1. In Patmos, which is also known as the isle of the Apocalypse, is where most of the devout followers of the religion gather to take place in the procession of the Epitaph, a tradition that has its roots from the Byzantine era.

2. In Tinos, hundreds of faithful or even simple bystanders gather to pray at the church of the Megalochari. The most popular tradition that is associated with this day says that all those who have received the blessing of the Mother of Christ in their lives will go up the many stairs that lead to the church on their knees.

3. In the village of Siatista of Kozani, this day marks the tradition of the horseback pilgrims, who ride their decorated animals all the way into the Mikrokastro monastery to pay their respects. Their return to the village marks the beginning of the celebrations which go on until the early morning hours.

4. The Koufonisia islands have become a popular tourist location in recent years, so it makes sense that they would have their own unique way of celebrating the occasion. Followers hop on small boats to head down to the Kato Koufonisi, which is where the chapel of Panagia is located. Then, once they’ve completed their prayers and it’s time to head back, the boats enter into a mini-race to see who will make it back to the Pano Koufonisi first. Once they all get back, it’s time to celebrate under the sounds of Greek music, with plenty of food and drinks to go around!

5. In the island of Kefalonia, they have a particularly unique way of celebrating this holiday, as there are many small, non-venomous snakes that appear there during this time of year. At the town of Markopoulo they have named the local church after them (Panagia Fidousa) as it is said that they bring good fortune to the locals and even more so to those daring enough to touch them.

Those are but a few of the many holidays that go on all around Greece on this day, to celebrate the Dormition of the Theotokos.

It’s worth pointing out that August 15 is also a popular name day, so you may want to check your social circles to see if you have anyone called Panagiotis, Panagiota, Maria, Marios, Despina or any abbreviations like ‘Takis’ or ‘Giota’.