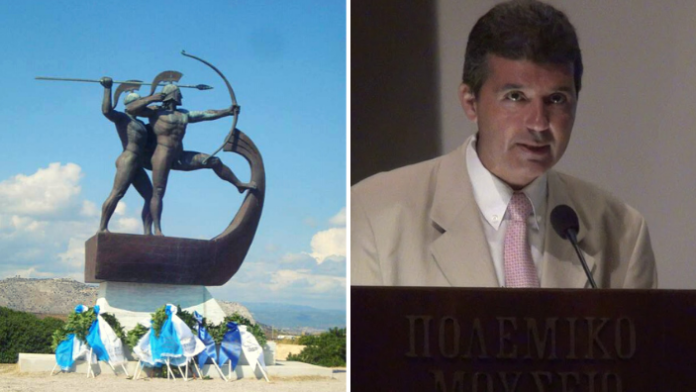 Dr Zisis Fotakis will present an online lecture entitled “The Naval Battle of Salamis: An Instructive Example of Coalition Naval Warfare”, on Thursday 5 November, as a part of the Greek History and Culture Seminars, offered by the Greek Community of Melbourne.

The naval battle of Salamis is one the largest military confrontations in antiquity having a modern demographic equivalent of well over 20 million souls.

It is also the bloodiest naval battle of  antiquity, recording many more human losses than most sea battles of the 20th century as a result of the speed and manoeuverability of the trireme, which depended on the physicality of its rowers, who in turn constituted an easy and obvious target for the enemy.

The naval battle of Salamis did not end the Greek-Persian War. Its strategic importance resembles that of the Battle of Stalingrad. It shows that coalitions can be impressive force multipliers, despite their often convoluted decision-making processes.

It is also a telling reminder of the capacity of the Hellenic nation to work miracles against the numerically superior adversaries, despite its small size and often divided polity. My presentation comments upon notable features of this memorable event.

Zisis Fotakis is a graduate of Athens University (B.A. in History) and Oxford University (M.Sc. in Economic and Social History, and Ph.D. in Naval History). His monograph “Greek Naval Strategy and Policy, 1910-1919” (Routledge: London and New York, 2005) was awarded a prestigious prize by the Hellenic Academy of Arts and Sciences (Akademia Athenon), and was favorably reviewed by eminent naval historians such as Professors Lambert, Rodger, Halpern, and Glete.

He was an academic visitor at Yale University and at the United States Naval War College. He has also received distinctions such as a Fulbright Research Scholarship, and a Caird Junior Research Fellowship.

Dr Fotakis has written extensively on Greek Naval History and taught various aspects of modern European and Greek history as a fixed-term lecturer in Greek universities.