‘My Rembetika Blues’: Mary Zournazi takes people on journey of self discovery in new film 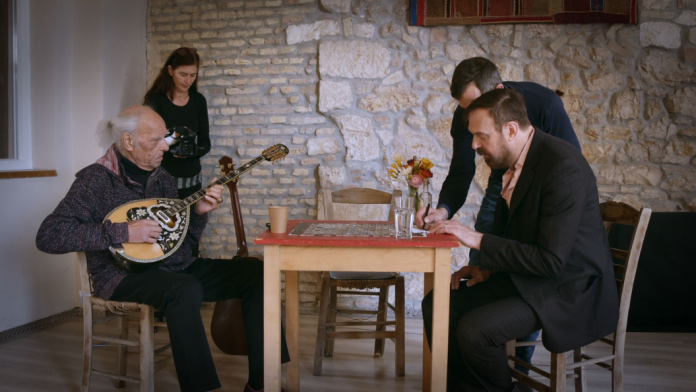 We are who we are not because of the people we have met but because of those we have left behind. When Mary Zournazi’s Greek parents “passed away” like a flash of lightning, the Professor from the University of New South Wales in Sydney (UNSW Sydney) decided not to petrify her memory.

“When I was growing up in Australia, 50 years ago, Greeks were considered fringe. So I didn’t want to know anything about the history of my ancestors,” Ms Zournazi tells The Greek Herald.

“All of a sudden that changed when my parents passed away. Then I began to want to know all about them. This is my advice to younger generations. Try to record everything about your parents because when they “leave” you will not have another opportunity to ask them. Their stories, recipes, everything they have told you.”

Ms Zournazi is speaking to The Greek Herald from Athens where her new film ‘My Rembetika Blues’ just premiered.

An idiosyncratic music, the marginal rembetika abruptly unite and mingle with its irrepressible momentum the uprooted existences of immigrants.

The award-winning creator of ‘Dogs of Democracy’ worked on the film for about five years and delivered to the audience a complete artistic result, with the sounds of rebetika causing goose bumps and the stories of people suddenly seemed so common to each other.

“I was interested in conveying the experience of immigrants and how music becomes a way to bring people closer, regardless of background and class. Music has the ability to heal wounds,” she says.

The permanent search for identity and migration:

‘My Rembetika Blues’ has been filmed in five countries. Turkey, with the first shot of the film showing Istanbul, Greece, Australia, Egypt and the United States of America.

At one point, in Thessaloniki, an itinerant musician played a song in the street. The author, George Skampardonis, who appears in the film, asks him where this music comes from, and the musician answers him almost from everywhere. They play it in Bulgaria, Greece and further north.

“This musician understood what I wanted to say in the film. That music travels like we do. It goes from place to place, changes a little at a time and everyone tries to make it appropriate,” Ms Zournazi says.

“At one point in the film, the director, Costas Ferris tells me that rebetika was banned both in Greece because they sounded too Turkish, and in Turkey because they considered them quite Byzantine. Sometimes we are exaggerated in our prejudices.”

Listening to the title, one possibly expects a historical record of rebetika throughout the years. In fact, it is Ms Zournazi’s personal journey to discover her identity under the sounds of rebetika.

“History is personal, but it can be felt by any person in the world. I used me as the main character of the film so that the audience that will watch it can better connect with the whole experience,” she says.

“Most of the characters in the film have an immigration story to tell. ‘My Rembetika Blues’ is a film about migration, your connection with other people, the discovery of your place and the world and how music manages to connect all these together.

“It’s a film that will surprise the viewer.”

Why is it so important to find the imprint that one’s ancestors left on humanity?

“At the beginning of the film I tell a story about the first time I heard rembetika. I felt goose bumps. I lived an almost metaphysical experience as if I had lived 100 years ago. So, I felt that music connected me to the past, in which I felt that I had lived. It was a moment that haunted me,” she says.

“So my personal journey began. I wanted to know why this music influenced me so much and I started looking for my ancestors, my relationship with Izmir, Egypt.

“When you are forced to leave your country or choose to leave, you lose something. When you don’t hear your language, when you don’t have your friends, then you lose a part of your soul. You can earn money, buy a house, take care of your family, but you’re losing something. This is the story that concerns everyone who has left our country.”

Lady Lash, the Negros tou Moria and the reception of the film:

The film features the popular Greek rapper “Negros tou Moria” and “Lady Lash,” a rapper from Melbourne with two identities, Aboriginal and Greek.

But why? Are they the rebetes of modern times?

While with Lady Lash, Mary Zournazi started playing on her mobile one of the most emblematic rebetika songs. “Smyrneiko minor” with The Voice of Marika Papagika and as she says, Lady Lash was touched by the song.

“With her participation I wanted to deconstruct stereotypes. To relay the message that someone of colour can indeed be of Greek heritage. The same is true for Negros tou Moria. He is more Greek identity than I am,” Ms Zournazi, whose film has been screened at several festivals online, says.

The documentary recently screened in Greece with the Ambassador of Australia, Arthur Spyrou, also watching it at the Athens premiere.

“When the film was shown in Greece, I was not sure of the reception it would receive. But people who watched had only good reviews to share,” she says.

The music in the documentary has the signature of Konstantinos Vita, one of the most important composers of electronic music in Greece, whom Mary Zournazi especially thanks.

In her future plans is a fiction film with the award-winning Greek-Australian writer, Christos Tsiolkas, while on May 21, Mary returned to Sydney – her home as she calls it.

“This is the surprise of my personal journey. I hadn’t thought about it. I’m Australian, I was born here, where my home is,” she concludes.

* The film “My Rembetika Blues” will be screened in selected Australian cities. June 4 in Brisbane, June 16 in Melbourne, June 23 in Sydney. At the Marrickville library on July 20, in regional Victoria as part of ‘F Project Cinema’ on July 27. In October in Adelaide and in November at Melbourne’s Federation Square.