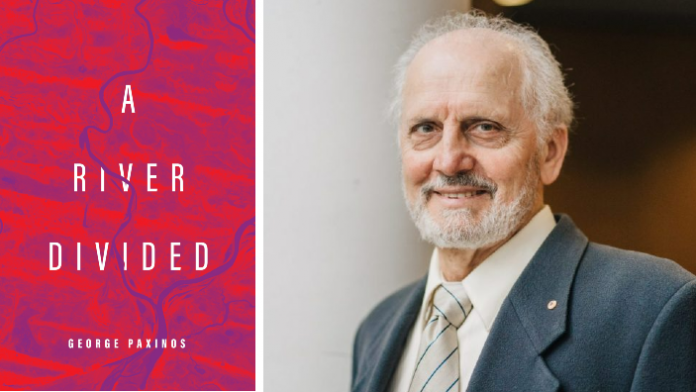 Professor George Paxinos is arguably one of the greatest minds in the world, having identified and named more brain structures in rats and humans than anyone in history.

Like many brain cartographers before him, he’s also principally published his work and research in books – 58 to be exact. These works have led to advancements in the prevention, treatment and cure of brain and spinal cord diseases, disorders and injuries.

But Professor Paxinos has also always had the urge to write a fiction novel focused on environmental concerns, such as deforestation and climate change. This urge has led to the publication of his new thrilling environmental crime novel – A River Divided.

Speaking with The Greek Herald after the release of A River Divided, Professor Paxinos says the novel “came out of a continuous defeat in things that I tried to do to protect the environment.”

In the 1980s and the 1990s, Professor Paxinos was the principal advocate for the return of trams to Sydney, founding The Light Rail Association of which he served as President. The Association aimed to reduce reliance on the car and reduce atmospheric pollution.

But despite Professor Paxinos’ best efforts, the tramway infrastructure of Sydney was not preserved and once the CBD and South East Light Rail network began to be built in October 2015, the environmental impact was huge.

“I was frustrated because I was losing every time and I thought if I were to write a novel, as they weren’t many novels on the environment back then, that I might be able to take the reader with me and make change in behaviour upstream from action – that is, to change attitude,” Professor Paxinos says.

After making this decision to write the novel, the neuroscientist began to think about a plot and he says it came to him one night at a Christmas Party in 1999.

“I was with some friends and someone asked me what we’re doing and I said, ‘we’re going to Spain’ and they asked, ‘if you’re going to Spain why don’t you visit San Juan de Compostela? The church where the bones of St James are buried’,” Professor Paxinos explains.

“I thought at that moment, ‘I’ll take some DNA and see what the guy looked like’ but then I thought, ‘why not someone far greater?’ The idea of cloning the remains of Jesus came to mind… and having him look at the world today and seeing what his reaction would be to the environmental issues that are facing us.”

It’s from this moment on that A River Divided was born.

The novel begins with Jesus’ DNA being discovered and then cloned to bring twins into the world. Separated by circumstance, the twins are unaware of each other’s existence and they live completely different lives. One day, they coincidentally meet and come to logger-heads over a project in the Amazon rainforest that could threaten life as people know it.

This narrative is so well-written and meticulously researched that it’s no surprise it took Professor Paxinos 21 years to finish writing it in a way which pays homage to religion, the environment and science.

“Of course, I had my day job but it was more so that… novel writing is a different skill to scientific writing. I thought it would be a good transfer of skills,” he says.

“I had the background [as] I was teaching neuroscience. I had also a long-standing interest in the environment… so I had that benefit but still, it is a lot of work to make the words.”

Despite this, the words Professor Paxinos did use in A River Divided dance across the pages as a demanding tango between scientific rationalism and literature.

It’s definitely a novel you don’t want to miss!