Angelis Govginas: Patriot and hero of Evia in Greek War of Independence 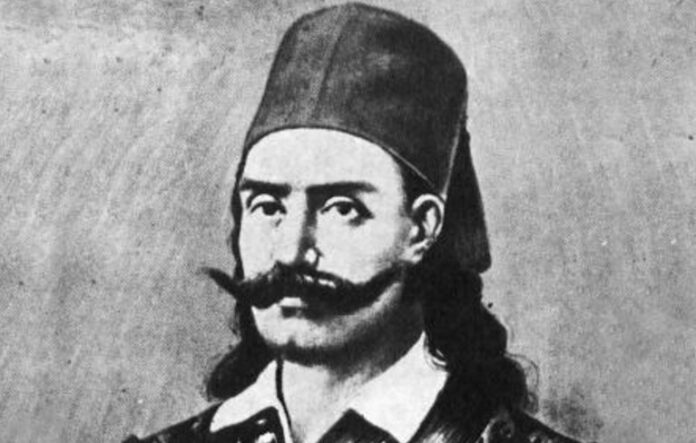 Angelis Govginas was a military commander and true patriot of Evia, defending his homeland against the Ottomans during Greece’s War for Independence in 1821.

Born in Evia as Angelis Tzoutzas in 1780, he adopted ‘Govginas’ or ‘Govios’ as a nickname. Govginas was known for having a pure character and strong sense of justice. Under the occupation of the Ottomans he felt compelled to serve in the garrison of Ali Pasha in 1817, being taught martial arts in the military school of the Albanian leader of Epirus.

He followed fellow independence hero Odysseus Androutsos to the battle of Hani of Gravia, where he was distinguished for his bravery and military skills.

In May 1821, he was called to command the local revolutionary bodies in Northern Evia, who were being desperately outmatched due to the failures of chief Verousi Moutsanas.

Govginas gathered a camp in Vrysakia to devise a plan, and only a few days later attacked the Turks in Psachna. Reviving the morale of the revolutionaries, he killed the Ottoman commander Osman Hatzarakis.

Omer Vryonis, leader of the Ottomans in Evia, was determined to stifle any revolutionary movement. The next day he attacked the Greek camp in Vrysakia, but was repulsed by Govginas and his 300 men, killing 70 of his soldiers.

In the battle, which lasted seven hours, Govgina’s personality and strategy were the difference. Vryonis returned to Vrysakia on July 18, but was again attacked by Govginas. The Ottoman leader was humiliated and forced to leave Evia and march against Athens.

In mid-February 1822, Govginas took over the command of all the Evian military corps. Govgina’s goal was remove the Turks from Chalkida and then march unhindered against Karystos. His plan was discovered by the Turks of Chalkida, who formed a military battalion of 1000 men and suddenly attacked the Greek camp in Vrysakia on the night of March 28, 1822.

In the ensuing battle, Govginas was seriously injured by a bullet in the back, later dying that same day. He was found dead by the Turks the next day and was beheaded.

Angelis Govginas is recognised for his persistence and incredible bravery in fighting for Greece’s independence, acting as a leader until his final breath.