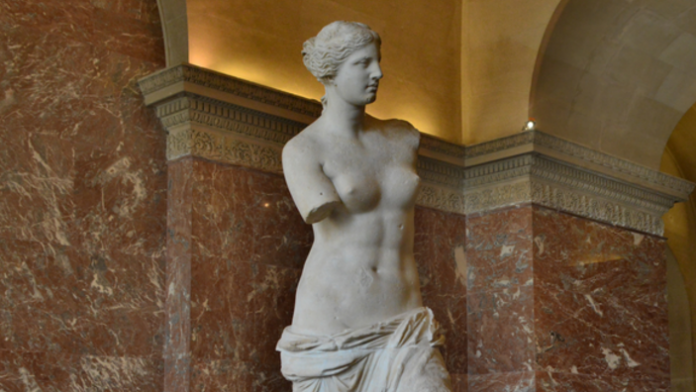 The Venus de Milo, or Aphrodite of Milos, is a sculpture created by the artist Alexandros of Antioch sometime between 150 and 125 BC that depicts the Greek goddess of love. It stands at 204 cm tall and is currently being displayed at the Louvre museum of Paris in France.

The statue, which was initially credited to another sculptor of the time, Praxiteles, is made entirely out of Parian marble. Written below are ten of the most important facts that you should know about it:

1. It was thought that the Venus de Milo was discovered by a man named Giorgos Kentrotas at the ancient city ruins of Milos island, which is part of the Cyclades. However, as was later pointed out by Australian researcher Edward Duyker, it was actually Giorgos’ father, Theodoros, who made the discovery.

2. The Venus de Milo helped fill in a gap at the Louvre museum that was opened due to the loss of many important historical artefacts such as the Venus de Medici. It’s what helped establish its position as a great work of art.

3. The greatest characteristic of this statue are its two missing arms, which were broken during its initial discovery.

4. The Venus de Milo was discovered on April 8 1820, one year before the Greek revolution against the Ottoman Empire.

5. During the events of the second World War and with the fall of France to the Germans looming on the horizon, the Venus de Milo was one of the few pieces of art that were safely evacuated from the Louvre towards the French provinces in order to ensure that it would remain in the hands of the French.

6. The statue has served as inspiration for many artists around the world and throughout the ages. Most notable among them was Salvador Dali, who created a statue around half the size of the original using plaster and filing the knobs of the surrounding drawers with pom-poms. He named his design “Venus de Milo aux tiroirs” (“Venus of Milos with drawers”.)

7. The Venus de Milo has gone on to inspire many other works of art across the ages. In 1988, the American actress Uma Thurman played a version of the statue in the movie dubbed “The Adventures Of Baron Munchausen.”

8. The name Venus de Milo is derived from the Latin name of the goddess of love and fertility Aphrodite, which is Venus. “De Milo” means simply “from Milos.”

9. The man behind the statue, Alexandros of Antioch, was also said to be a great composer and singer of his time.

10. Although it is common belief that the statue is indeed a depiction of Aphrodite, there are some that disagree, pointing out that it is actually Amphitrite, the goddess of the seas, that the sculptor meant to portray.

Sources: Wikipedia and The Louvre