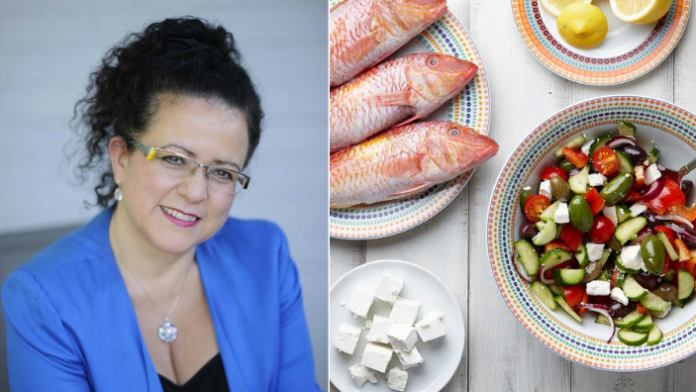 With over 50 published papers and 1300 citations, 3 published books, and 35 coauthored chapters in 7 university books, Dr. Antigone Kouris-Blazos is one of Australia’s most well-established dieticians.

Dr. Antigone Kouris-Blazos is a second-generation Greek Australian researcher who has filled the post of associate professor at La Trobe University’s school of rehabilitation, nutrition, and sport since 2011.

She is a practicing dietician with over 30 years of experience as a clinician, researcher, author, and educator.

She is based in Melbourne and says her interest in healthy eating came from her parents who migrated from Athens to Australia.

“Even though we did eat quite a bit of meat, my parents were quite careful. We rarely barbequed meat, they kept sugar dense foods like soft drinks out of the house, and my mum, like most other migrants, made us eat legume-based meals twice a week,” she tells the Greek Herald.

“They had a different outlook and my parents were very well educated. That plays into how you view food and health.”

Dr. Kouris-Blazos’ landmark PhD was the first study to show that adherence to a Mediterranean diet pattern in old age conferred longevity.

The cross-cultural, international study Diet and overall survival in elderly people, published in the British Medical Journal in 1995, collected the data of 182 elderly residents across three rural Greek villages, including a village 20 kilometres from the capital of Athens called Spata.

The study pioneered the first Mediterranean diet score, which classified dietary patterns and allowed them to be analysed statistically, and showed that Greeks had the lowest mortality rate.

“[The score] captures food groups, like how much meat versus fish versus legumes… [not] the cuisine, per se.”

“If it wasn’t for this score that we developed, maybe we wouldn’t have had so much research on the Mediterranean diet…”

Kouris-Blazos takes an epidemiological approach to diet research, looking at food patterns as opposed to cuisines.

Professor Kouris-Blazos’ studies have shown time and again that people of Greek descent have their diets to thank for their low mortality rates.

So how do Greek migrants have the highest CVD rates and yet don’t seem likely to die of them?

“If you have CVD risk factors, it increases your risk of having heart disease, cancer, and so on, but that’s not what we found [with Greek migrants].”

“We actually found the opposite: that they had these risk factors but had much lower death rates than the slimmer Anglo Australians who had less diabetes, less heart disease, and yet higher death rates from these conditions.”

Kouris says there are solid and unanimous speculations for this paradox, but admits time is running out to quantitatively confirm it.

“We look at all possible factors to explain this paradox such as diet, social activities, physical activity, mental health, and more. Following the Mediterranean diet score was the most important factor conferring longevity in our Greek migrants, especially their intake in legumes,” she says.

“Apart from the diet, we suspect it’s also got something to do with inflammation and the microbiome, which are influenced by diet.”

“We don’t have microbiome or inflammatory markers on Greek migrants, unfortunately, and we’re slowly losing this group of people because they’re all in their 80s and 90s and are dying.”

“We’re losing the opportunity to get this information from them.”

“We need to get more blood and stool samples to look at what it is about this group; why are they so protected from cardiovascular risk factors?”

Research on the Mediterranean diet, however, indicates that the cuisine reduces inflammation in the body and thus lowers the mortality rate of those who live with CVDs.

This is why the Mediterranean diet forms the basis for Kouris’ practice as a dietician, her own diet, and even her own brand line of Skinnybik lupin biscuits.

After all, who doesn’t love fakes (lentil soup) and some sofrito sauce?