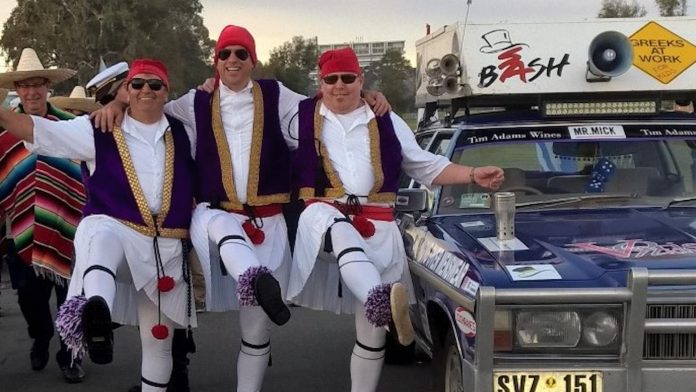 It’s another year, another SA Variety Bash for Craig Phillips, Chris Carypidis and Andrew Glastonbury who are set to hit the road from 13-20 August dressed as Evzones to raise funds for South Australian kids in need.

In its thirty-fourth year, the week-long event will see more than 250 crazily costumed entrants and 72 colourful vehicles travel through regional towns such as Roxby Downs, Glendambo, Ceduna, and Whyalla and ‘Team CAR ENA – The Greeks’ will be among them.

“My family was involved in The Spastic Centre (now SCOSA) going back to the early 1960s. I witnessed first-hand the struggles of children with special needs and the imbalance of resource and opportunity,” CAR ENA owner, Craig Phillips, tells The Greek Herald.

An ‘adopted Greek’ as he calls himself, due to his involvement with the Greek community and South Australia’s Evian Society where his wife is a President, Craig Phillips and his team have raised more than $500,000 for the charity in the last twenty years.

“I feel proud to be associated with a wonderful group of individuals who work to give children a better life. Egos are abandoned and we work as a team without regard for status or wealth. I have always felt welcomed and part of a great cause. It is truly humbling,” Phillips says.

With this year’s event, Variety SA is hoping to raise more than $1.5 million for kids in regional South Australia and ‘Team CAR ENA – The Greeks’ will make sure to once again attract crowds.

“Each team has its own theme as an identity with the mandate to entertain. Who could do it better than Greeks?” Phillips says.

“Dressed as Evzones, well theatrical versions really, we serve olives, Haloumi, Calamari, dolmades and many more foods in very remote places. When the Greek car stops, so does everyone else.

“We rely heavily on our corporate sponsors who despite harsh economic times remember that kids are our future and generously donate.

“All of our expenses in building, maintaining and running our car as well as meals, accommodation and any other expenses are out of our own pocket. This means every dollar donated goes to the kids in need.”

Asked to share a funny story from his Bash adventures, Craig Phillips shares memories from a few years back when the team visited the town of Wudinna in central Eyre Peninsula.

“During a conversation with the publican and his staff, a voice spoke out and said she was looking forward to not being the only Greek in a remote town. In order to entertain the bashers and locals we decided to make the evening meal our Big Fat Greek Wedding!” he says.

“There is a team out of Port Lincoln who theme as the Runaway Brides so add them and a few Yiayias and Groomsmen and we had a wedding party. The entire town got behind making the wedding cakes and decorations. We brought in plates for breaking, sugared almonds and made name cards.

“The food was Greek style; tables were set in line with the Grecian key on the tablecloths. A night everyone remembered. Oopa!”

Over the past 33 years, the SA Bash has raised in excess of $47 million for South Australian children who are sick, disadvantaged or living with disability.