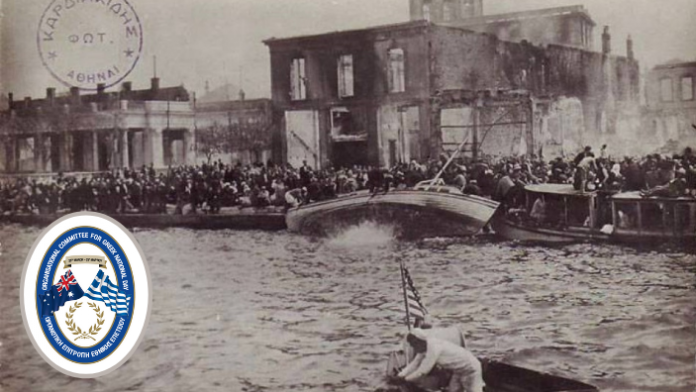 The Organising Committee for the Greek National Day has announced that registrations are now open until December 1, 2021, for Greek community organisations to submit event proposals for the 100th anniversary of the Asia Minor Catastrophe next year.

Submissions should be sent electronically to the General Secretariat of Hellenes Abroad at: greeknationalday@gmail.com or by post to P.O. Box 2250, 377 Gore Street, Fitzroy VIC 3065.

For further information, you can also contact the Chairman of the Committee, Antonis Tsourdalakis, on 0419856736.

We are three months before saying goodbye to 2021, which was a milestone year for Greece and Hellenism everywhere.

This year we had the opportunity to honour with pride and respect the 200th anniversary of the most important milestone in modern Greek history: the beginning of the Greek Revolution that led to the creation of the Greek independent nation-state in 1830.

During the year, many organisations participated in the celebrations of the important anniversary for the Greek Nation through various actions that were organised. The program, which was announced in early 2021, involved a total of over 90 organisations and schools from Victoria with more than 140 events.

The events were started by the Organising Committee for the Greek National Day in Victoria, in collaboration with the General Secretariat of Hellenes Abroad, where they organised a competition entitled “Ambassadors 200” which was attended by over 650 students and young people from across the State. Particularly moving was the unveiling ceremony and laying of wreaths at the Monument of the Heroes where all the representatives of various organisations celebrated the national anniversary and paid tribute to the heroes of 1821.

Although the number of events planned was very large, unfortunately due to the COVID-19 pandemic and the closure experienced by the State of Victoria for most of the time, this led to the cancellation of several events. For this reason, many organisations and institutions have decided to move the planned events of 2021 to a new date during the year 2022.

The Organising Committee for the Greek National Day, made up of representatives from all the major community organisations in Victoria, has already received proposals for events to take place in 2022. Wanting to include the entire Greek community, it invites private, public or cultural groups, fraternities, federations, women and youth associations and schools, to register their event in time.

Deadline for submission of events to be included in the annual program of the Organising Committee for the Greek National Day will be December 1, 2021 and should be sent electronically to the Secretariat at: greeknationalday@gmail.com or by post to P.O. Box 2250, 377 Gore Street, Fitzroy VIC 3065. For further information you can contact the Chairman of the Committee, Antonis Tsourdalakis, at 0419856736.