Over $60,000 raised for Modern Greek Studies at Macquarie University during annual ball 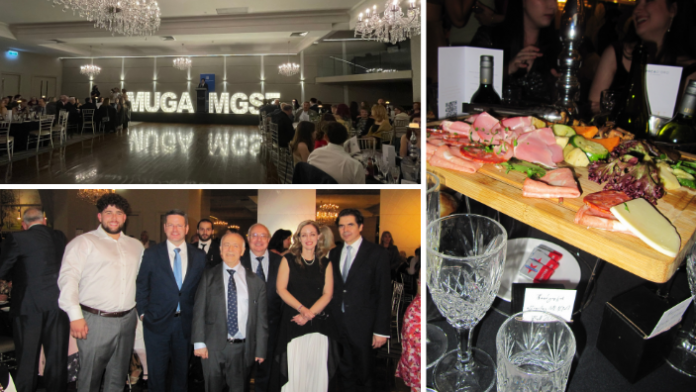 The ball, which was hosted under the auspices of the Consulate General of Greece in Sydney, was attended by about 250 people.

This includes a number of VIP guests and officials including the Consul General of Greece in Sydney, Christos Karras; the NSW Minister for Multiculturalism, Mark Coure MP; Member for Canterbury, Sophie Cotsis MP; their Graces Bishop Bartholomew of Charioupolis and Bishop Christodoulos of Magnesia; the Executive Dean of the Faculty of Arts at Macquarie University, Professor Martina Mollering; Lecturer in Modern Greek Studies at Macquarie University, Dr Patricia Koromvokis; the President of the MGSF, Theo Premetis; the CEO of the Hellenic Initiative of Australia, Stergitsa Zamagias-Hill; the President of the Greek Orthodox Community of NSW, Harry Danalis; the AHEPA NSW Grand President, Bill Skandalakis; and Father Athanasios Giatsios, among many others.

On the night, people enjoyed a three course meal as they mingled and listened to a number of speeches. The emcee for the night and current President of MUGA, Zoe Re, welcomed everyone to the event before introducing the speakers to the stage.

First up was the former President of MUGA, Sam Giovas, who described how the student association and the MGSF successfully pushed to reinstate Modern Greek as a major at Macquarie University and since then, the university course has flourished.

“It is undeniable that MUGA’s success goes hand-in-hand with the Greek department’s growth in numbers, highlighting the importance MUGA holds in the Greek and wider NSW community,” Mr Giovas added.

Next to the stage was the Consul General who stressed that “the discipline of Modern Greek studies at Macquarie University has been promoting the knowledge of Greek language, culture and history for decades and thus, has enriched multicultural Australian society.”

In her speech, Dr Koromvokis described a number of initiatives and partnerships which the Program of Modern Greek Studies at Macquarie University has launched recently despite the hardships faced by the COVID-19 pandemic.

“The role of the Modern Greek Studies Program of Macquarie University in terms of the extension and promotion of the Greek language and our culture has been dynamic and helps to further bridge Greece and Australia,” Dr Koromvokis said.

The Lecturer then announced the new ‘Award of Hellenism’ by MUGA and the MGSF, which will honour people who have significantly contributed towards Modern Greek studies at the university.

On the night, the inaugural award was given to Professor Mollering because “her ethos and solidarity have been an era in the trajectory of the Program of Modern Greek Studies” and she has been instrumental in “securing the future sustainability” of the program.

Later, Mr Premetis presented Ms Cotsis with the ‘Major Contributor Award 2022’ for her dedicated service, tireless work and countless contributions towards the MGSF.

At the conclusion of all these official proceedings, people were encouraged to enjoy the Greek music and dance the night away. There was also a raffle sale and auction.