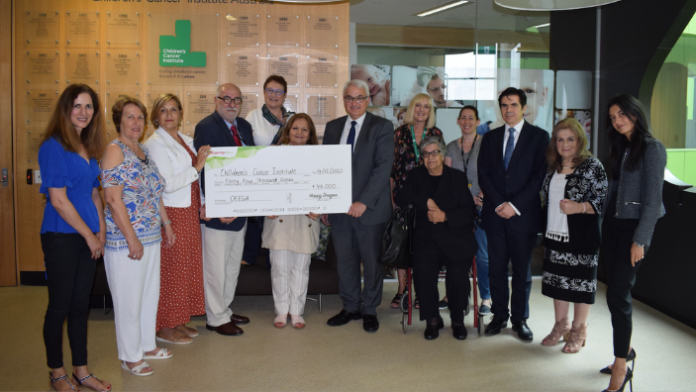 Cancer does not stop with the pandemic and neither do the Greek Australian Women’s (OEEGA NSW) fundraising efforts to support Children’s Cancer Institute (CCI) in finding a cure and safer treatment for childhood cancer.

Although the organisation had to cancel their annual events due to the State Government’s restrictions, the President Ms Irene Anesti and the Committee acted quickly and within six weeks they organised a Radio Marathon through which they raised $44000.

“Since 2007, OEEGA NSW have raised $414000 for CCI. We received great support from Clubs, Associations, Community organizations, Councils, political and religious representatives and many businesses (Greek Australian and Non-Greek Australian alike).

“It was truly astounding to see how many pensioners and people who struggled financially facing high unemployment and uncertainty, were willing to travel across 2-3 suburbs to come to the Radio station or go to their nearest Delphi Bank branch to deposit even a small amount of money in support of the initiative,” OEEGA Committee Member, Theo Skhinas tells The Greek Herald.

A fundraising cheque was presented from the OEEGA Committee to CCI representatives, Professor Kavallaris and Anne Johnston, on Monday, December 14 at the Children’s Cancer Institute.

In attendance were the Consul General of Greece in Sydney, Christos Karras and General Manager of 2MM Radio Station Yiannis Meravoglou.

“Both Professor Kavallaris and Anne Johnston thanked the Committee for their efforts this year. The Institute acknowledged that most of the population in Australia were suffering due to the economic impacts of the pandemic. With such high unemployment, CCI did not expect much in 2020 and were genuinely surprised when they found out how much had been raised for the children.

“The $44,000 were not easy to pull together, however OEEGA were certain that the funds would be put into good use and help save at least 4 children this year,” Mrs Skhinas says.

A letter of appreciation to OEEGA NSW President

In a gesture of appreciation to the organisation’s President, Irene Anesti, the Committee members have written a heartfelt letter, commending her on her tireless efforts and great leadership.

“We feel obliged to express our immense gratitude and our unlimited admiration for your efforts this year to raise money in support of the CCI.

“At a time when we all had stopped our efforts to raise money, due to coronavirus, you – the soul of our Organization – did not give up. You had the idea, you took the initiative to organize the radio fundraiser and you worked hard and tirelessly, to carry it out with great success….A thousand congratulations and a thousand thanks from us all,” reads the letter.