NSW commemorates 48th anniversary of the Turkish invasion of Cyprus 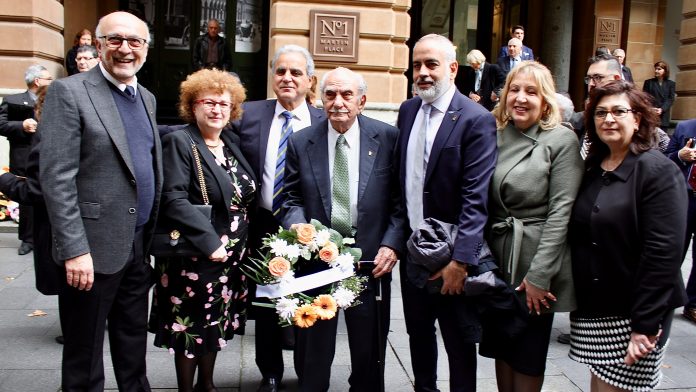 The Cypriot and Greek communities of New South Wales came together over the weekend to commemorate the 48th anniversary of the Turkish invasion of Cyprus with a jam-packed cultural program.

Events kicked off on Saturday, July 23 with a special cocktail party at The Cyprus Club in Stanmore in the presence of the Shipping Deputy Minister to the Cypriot President, Vassilios Demetriades.

The formal function was attended by over 50 people including a number of dignitaries and prominent community members such as the High Commissioner of the Republic of Cyprus in Australia, Martha Mavrommatis; His Grace Bishop Bartholomew of Charioupolis; the Co-Presidents of the Justice for Cyprus Co-ordinating Committee (SEKA NSW), Chris Koulinos and Dr Miranda Adamou; the President of the Pan-Australian Justice for Cyprus Coordinating Committee (PASEKA), Georgia Alexandrou; and the President of the Cyprus Community of NSW, Andrew Costa; among many others.

A number of passionate speeches were given on the night by some of these attendees.

The Greek Herald also spoke with the Shipping Deputy Minister on the night and he gave a strong message to our readers, encouraging them to continue to bring the Cyprus issue to the attention of the Australian Government.

“I’m here in Australia to convey a message from the President and all the political parties in Cyprus that we should not forget. We should continue and make every attempt in order to see a unified Cyprus,” Mr Demetriades told The Greek Herald.

“I really want to thank all Greeks and Cypriots here in Australia for their continuous support to Cyprus and of course, to continue having Greek traditions, Cypriot traditions in their heart, in their everyday life, promoting our problem and of course to promote our values to the younger generation.”

With the conclusion of our interview and the event itself, everyone in attendance went home only to return the next day for a memorial service in memory of the fallen Cypriot fighters at the Cathedral of The Annunciation of Our Lady in Redfern.

At the end of the memorial service, His Eminence Archbishop Makarios of Australia awarded Ms Mavrommatis in recognition of her life-long service to Orthodoxy, and wished her well at her upcoming diplomatic posting to China.

Following this memorial, dignitaries, officials and members of local Greek and Cypriot community organisations gathered at the Cenotaph in Martin Place for a wreath laying ceremony.

The ceremony included a prayer reading by Bishop Bartholomew, the playing of the Last Post and Rouse by Harry from the St George Brass Band, the reading of the Ode in Greek and English by Andrew Kitsos and Peter Tsigounis, and a minute silence.

Finally, the day ended with an anti-occupation gathering at The Cyprus Club and a powerful cultural program which was emceed by Themi Kallos.

Ms Mavrommatis drew loud applause from the crowd with her speech as she stressed “we will never forget” those who lost their lives during the 1974 Turkish invasion of Cyprus, the refugees and those people who are still missing.

“We will continue fighting until we are victorious,” the Cypriot High Commissioner exclaimed. “We continue our battle because we want Hellenism and Christianity to survive in Cyprus.”

In his speech, Mr Koulinos, the Co-President of SEKA NSW, stressed that the Cypriots and Greeks in NSW will “stand beside” the government of Cyprus in calling for a solution to the Cyprus problem.

Mr Costa from the Cyprus Community of NSW also took to the podium and shared how he was impacted when the bones of a close friend, Costas Roussidis, were recently found after he went missing during the 1974 Turkish invasion.

Mr Costa then read out a speech given to Parliament four years ago by Australian Prime Minister Anthony Albanese calling on the Federal Government to support Cyprus. Mr Costa urged Cypriots across Australia to continue lobbying the PM to put pressure on Turkey about the Cyprus problem.

At the conclusion of these speeches, a number of gifts were exchanged between the Shipping Deputy Minister and the Presidents of PASEKA, SEKA NSW and the Cyprus Community of NSW.

Official proceedings ended with a singing performance by the Community’s choir, as well as the obligatory official photographs with everyone in attendance.