‘Looking forward to it’: Greek businesses in Sydney prepare for Freedom Day 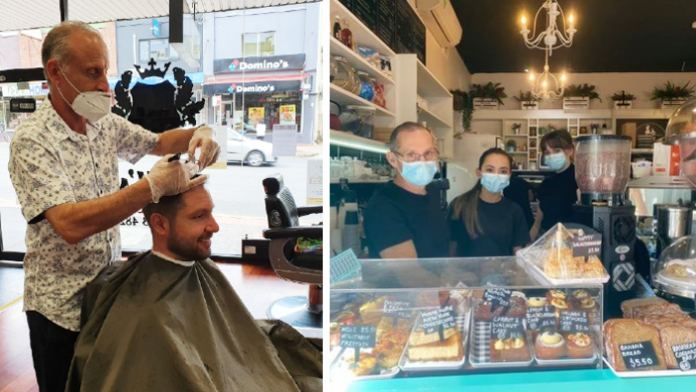 It’s been four months since Bill Papas from Bill’s Barber Shop in Willoughby has cut the hair of his loyal customers due to the tough lockdown in New South Wales. While Mr Papas says he’s ‘enjoyed a slice of retirement,’ he’s also ‘looking forward’ to welcoming customers back to his store again on October 11.

From October 11 or ‘Freedom Day,’ fully vaccinated people will be given new freedoms under the reopening NSW roadmap. This includes being allowed to have up to five visitors in a home where all adults are vaccinated and up to 20 people can gather in outdoor settings.

Personal services, such as hairdressers and nail salons, can also open with one person per 4 square metres, capped at five clients per premises.

Mr Papas tells The Greek Herald the 4 square metre rule for his barber shop ‘is not ideal but if that’s what it is for us to reopen, we will just have to go with it.’

“I can have a customer in the chair and four waiting. So the four that will be waiting will be by four square metres. We’ve got that room fortunately to accommodate that. Over and above that, they’ll be chairs outside,” Mr Papas says.

Setting these precautions in motion does take time and resources, but Mr Papas says having a set reopening date has still provided him with some relief.

“We’ve been shutdown for four months. There’s been no income for four months and it’s good to get back to seeing customers and trying to recoup the business we had. We just have to hope that we do have a business when we do go back,” Mr Papas says.

It must be noted here that Freedom Day is just one part of the NSW roadmap out of lockdown.

In the second stage when NSW hits 80 percent vaccination coverage, personal services, such as hairdressers and nail salons, will be uncapped.

Hospitality venues will still need to operate with space restrictions, but the requirement to be seated while drinking indoors will be removed. Those who are not fully vaccinated can only access hospitality settings for takeaway.

In the final stage from December 1, unvaccinated residents in NSW will enjoy the exact same level of freedom as vaccinated people.

The owner of East Avenue Café in Oatley, George Mandis, tells The Greek Herald that regardless of this plan, he’s still ‘really worried about the whole thing.’

“Inside [seating] is going to be a problem for me because I can only fit two, if I can squeeze a third table, I’ll be lucky,” Mr Mandis says.

“It is a little bit tight but we’ve done it before, so we know what to expect. Thank God we’ve got a big outside area and it’s summer now so I’m content with that.”

Back in late September, the NSW Shadow Minister for Small Business, Steve Kamper, called for more consistent rules from the NSW Government on reopening.

“Small business needs clear and simple rules so they can get back to doing what they do best: creating decent jobs and making solid profits,” Mr Kamper said.

On Sunday, NSW Health Minister, Brad Hazzard, clarified some of the rules in the reopening plan, especially those around unvaccinated people.

Penalties may apply for individuals and businesses who don’t comply.

Mr Mandis from East Avenue Café says he will follow the restrictions, ‘but I don’t know if I’m going to be the COVID police.’

“We are quite worried. My wife has even told me, and she doesn’t work in the shop, but she says to me, ‘don’t open up, keep takeaway only. How are you going to discriminate when people come down?’… I don’t know what to do,” Mr Mandis says.

For his part, Mr Papas says he’s fortunate the Willoughby area, where his barber shop is located, has high vaccination rates but he knows he will still get a few people who are anti-vaccine.

“For me, everyone is welcome. I don’t discriminate,” Mr Papas concludes.

A sure sign that although Greek businesses in Sydney are excited to be reopening, there will still be some significant hurdles ahead for them.