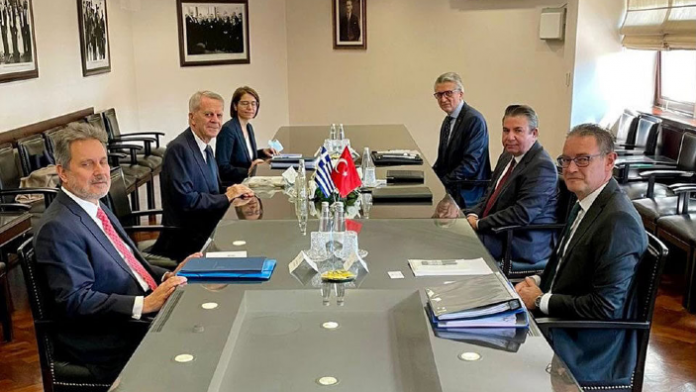 The 63rd round of low-level exploratory talks that took place in Ankara concluded on Wednesday amidst controversial statements by Justice and Development Party (AKP) spokesperson Omer Celik.

The talks, which began in March 2002, aim to resolve bilateral disputes in the Aegean and Mediterranean and lay the groundwork for a fair, lasting and comprehensive settlement to outstanding issues in the Aegean Sea.

The 62nd round of talks had been held in Athens on March 16 and the 61st were in Istanbul on January 25, marking the first direct talks between the two countries in nearly five years after Athens suspended them following the 60th round in March 2016.

As is standard practice, the content of the discussion between the two parties in the exploratory talks is not publicly disclosed in a press release.

However, the Turkish government continued to stoke tension on Wednesday amidst controversial statements by Justice and Development Party (AKP) spokesperson Omer Celik.

“The Blue Homeland is our red line, it is an integral part of our homeland” stated Celik and added that “we will fight for the Blue Homeland, and we will pay any cost.”

He also called on Greece and Cyprus to abandon “their maximalist conduct in the Aegean and the Eastern Mediterranean.”